The Promise of Virtual Reality

The story of VR, the most immersive communications technology to come along since cinema, as told by two of its pioneers.

WHAT A DIFFERENCE A FEW DECADES CAN MAKE. When the reader first meets Jaron Lanier, often touted as the “father of virtual reality,” in Silicon Valley in the early 1980s, the valley is a gearhead’s playpen filled with quirky places and even quirkier people—Mr. Lanier chief among them. Uncredentialed either as a businessman or as an academic, he is driven in his pursuit of a technology he can barely explain, much less realize. (It would be years before computers could display convincing imagery in a 3-D headset.) 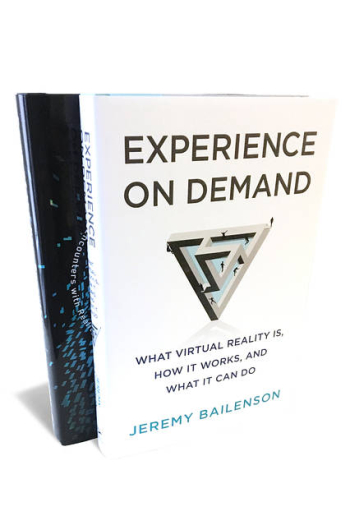 Fast‑forward to 2014, when Jeremy Bailenson, a Stanford professor and one-time Lanier protégé, is giving a virtual-reality demo to Mark Zuckerberg, the founder and CEO of Facebook. By this time the technology is so advanced that Mr. Zuckerberg can be sent flying through the air like Superman. Apparently the illusion worked: Weeks later, in a move that shocked just about everyone, Mr. Zuckerberg would shell out $2 billion to buy the startup Oculus VR, which had yet to ship a product.

The story of VR’s evolution from wackadoodle pipe dream to multi-billion-dollar corporate wager is told by these writers in two books that are as different as the eras they describe. Mr. Lanier’s “Dawn of the New Everything: Encounters with Reality and Virtual Reality” is a highly eccentric memoir that traces the author’s quest for VR back to its roots, not as some sort of geeky engineering challenge but as a feeling he had as a child of being overwhelmed by the magic of the universe. Mr. Bailenson’s “Experience on Demand: What Virtual Reality Is, How It Works, and What It Can Do” is a far more straightforward account of the fantastical made real—or seemingly real, which of course is the point.

If you’re planning to read both books—and if you want to understand the most immersive new communications medium to come along since cinema, you should—I’d suggest starting with Mr. Bailenson’s. It’s short, it’s levelheaded and it tells you what you need to know. Among other things, the book answers the sometimes vexing question of what VR is actually good for. In addition to running Stanford’s Virtual Human Interaction Lab, which he founded in 2003, Mr. Bailenson is co-founder of STRIVR, a startup launched by a grad student (and former Stanford football player) who saw VR’s potential as a training device. It’s one thing to watch game footage on a video screen, and quite another to experience it in a virtual reality headset. The difference lies in what’s called “presence”: the overwhelming sensation that you are actually there. As Mr. Bailenson writes, “VR engulfs us.”

The illusion of presence is what drove Mr. Lanier from the start. He envisioned VR not as an alternative to physical reality but as an enhancement—a way to more fully appreciate the wonder of existence. More conventional individuals, their senses dulled by the day-to-day, may be drawn to virtual reality because it seems realer than real; he considered it a new form of communication. “I longed to see what was inside the heads of other people,” he writes. “I wanted to show them what I explored in dreams. I imagined virtual worlds that would never grow stale because people would bring surprises to each other. I felt trapped without this tool. Why, why wasn’t it around already?”

“Dawn of the New Everything” is full of such self-revelatory moments. The author grew up an only child in odd corners of the Southwest, first on the Texas-Mexico border, then in the desert near White Sands Missile Range. When he was nine, his mother, a Holocaust survivor, was killed in a car crash on the way home from getting her driver’s license. The tract house they’d bought burned down the day after construction was completed. The insurance money never came, so Jaron and his father lived in tents in the desert until they could afford to build a real home—which turned out to be a mad concoction of geodesic domes of Jaron’s own design. They called it Earth Station Lanier.

At 14, Jaron stopped going to high school and started taking courses at nearby New Mexico State, raising goats and selling goat cheese to pay the tuition. Intellectually he was drawn to music and mathematics, but he turned to computer science in hopes of finding a way to allay his anxieties. (“I worried about Earth’s orbit,” he writes, cryptically. “So precarious.”) Eventually he made his way to Santa Cruz, a hippie enclave on the San Francisco Peninsula, and then to nearby Silicon Valley. Lacking a degree from high school, never mind college, he nonetheless parlayed his virtual-reality obsession into a company, VPL Research, that for a few years in the late ’80s made VR seem real, if only in a lab setting. Then came board fights and bankruptcy, and VR disappeared from public view for more than 20 years.

What went wrong at VPL? Unfortunately, you won’t find out here. Mr. Lanier warns us he isn’t going to deliver a blow-by-blow; instead we get a disjointed sequence of half-remembered anecdotes. What does come through is his ambivalence about going into business at all, and his even deeper ambivalence toward writing about it.

The larger question, now that VR seems poised to become a mass medium, is where it will take us. Escapism, violence, propaganda—potential misuses abound. It could also foster empathy and provide a powerful new medium for storytelling. But even today, VR suffers from a basic shortcoming. The illusion of presence comes largely from having your head encased in a monitor—but since virtual humans are still fairly primitive, that makes it nearly impossible to connect with others in a realistic fashion. “Virtual reality is going to become a must-have technology when you can simply talk and interact with other people . . . in a way that feels utterly, unspectacularly normal,” Mr. Bailenson writes. Someday we’ll get there—but in the meantime there’s a lot of work to be done. ■