"We can spy the future in Frank Rose’s brilliant tour of the pyrotechnic collision between movies and games. This insightful book convinced me that immersive experiences are rapidly becoming the main event in media. . . . Future-spotting doesn't get much better than this."

"The Internet, as Frank Rose writes in 'The Art of Immersion,' 'is the first me­dium that can act like all media. It can be text, or audio, or video, or all of the above. . . .' According to Rose, 'a new type of narrative is emerging – one that’s told through many media at once in a way that's non­linear, that’s participa­tory and often game-like, and that’s designed above all to be immersive. This is deep media.'"

"Compelling . . . From 'Star Wars' to 'Lost' ('television for the hive mind'), it is the immersive, 'fractal-like com­plexity' of story­telling that turns on digital audiences and sends them online to extend the fantasy via wikis, Twitter and blogs."

"The Internet has altered many habits of life, but is it powerful enough to change the way we tell stories? Frank Rose, longtime writer for Wired and author of the book 'The Art of Immersion,' thinks so. . . . The author explains that every new medium has disrupted the grammar of narrative, but all had a common goal: to allow the audience to immerse themselves in the stories that were being told."

We are witnessing the emergence of a new form of narrative that is native to the In­ternet.

IN THE 20TH CENTURY WE WERE SPECTATORS, passive consumers of mass media. Now, on YouTube and Facebook and Twitter, we are media. And we view television shows, movies, even advertising as invitations to participate — as experiences to immerse ourselves in at will.

The result is an approach to narrative that never existed before. Just as the printing press gave rise to the novel and the motion picture camera led to the invention of cinema, today’s digital tools are encouraging us to develop new kinds of stories. Told through many media at once in a nonlinear fashion, these new narratives en­cour­age us not merely to watch but to par­ticipate, often engaging us in the same way that games do. This is “deep media”: stories that are not just entertaining but immersive, that take you deep­er than a 30-second spot or an hour-long television drama or a two-hour movie will permit. 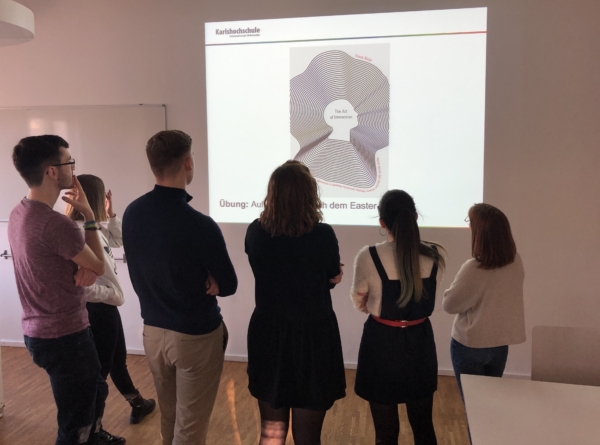 Management students in Karlsruhe, Germany ponder the meaning of the red dots on the cover. Photo: Thomas Zorbach

Writing in the Italian daily La Repubblica, the novelist Giorgio Vasta put it this way: “In ‘Con­tin­uity of the Parks,’ Julio Cor­tázar imagines a man at the end of the day as he sits in his favorite arm­chair and goes back to read­ing a novel. The scene that passes before him portrays the fur­tive move­ments of some­one about to com­mit a crime. Through a ro­ta­tion of 360 degrees, the read­er of Cor­tázar’s story fol­lows the read­er of the novel, who in turn is fol­low­ing the final steps of a crim­inal wield­ing a knife as he passes through the rooms of a house and comes up behind a man sitting in a chair. . . . Frank Rose’s account of storytelling in the Internet age re­flects on this paradox: How is it that stories — the ones we read, watch at the movies or on TV, or follow (and help con­struct) on the In­ter­net — are able to walk up to our chair and be not only be­hind us but all around us? Because stories no longer stay in their place. We don’t find them only in books, onscreen, on a DVD or in a theater. . . . They are be­hind us, be­side us, above us, em­bedded in our bodies.”

Not too surprising, then, that the AIGA Design Educators Community should put The Art of Immersion on its “required reading” list, calling it “a primer for experience design.” Or that the International Journal of Advertising should call it “an essential overview . . . a prerequisite for those wishing to enter Hollywood, and marketers or PR professionals wishing to engage an increasingly frag­mented audience.”

But what does it mean that stories no longer stay in their place? It means that storytellers of every sort — authors, filmmakers, show runners, game designers, advertisers, marketers — need to function in a world in which distinctions that were clear in the industrial age are be­coming in­creasingly blurred:

The blurring of author and audience: Whose story is it?

The blurring of story and game: How do you engage with it?

The blurring of entertainment and marketing: What function does it serve?

The blurring of fiction and reality: Where does one end and the other begin?

In THE ART OF IMMERSION, Frank Rose explains why this is happening, and what it means for us all.

. . . Throughout the book, it seems you see these creative changes towards a more immersive and expansive entertainment form being fueled by the emergence of games. Why do you think computer and video games have been such a “disruptive” influence on traditional practice in other entertainment sectors?

Rose: Because they engage the audience so directly, and because they’ve been around long enough to have a big influence on other art forms. Movies like Inception, as you’ve observed, are constructed very much like a game, with level upon level upon level and a demanding, puzzle-box approach to narrative. If you’re a gamer, you know intuitively how to approach this. If you’re not, well, good luck.

One of the reasons I started this book was that I’d begun to meet screenwriters who’d gone from TV to games and back again, and when they came back it was with a different approach to narrative—moving across multiple levels, thrusting you directly into the story and letting you figure it out for yourself, that kind of thing. But at first I just had this vague sense that games and stories were blurring into each other—that in some way that I didn’t fully understand, games were becoming stories and stories were becoming games. I got obsessed with trying to understand the relationship between the two. I spoke with a lot of game designers, but it wasn’t until I got to Will Wright that I found someone who could . . .

Read the three-part excerpt in Wired:

What is it about stories, anyway?

Anthropologists tell us that storytelling is central to human existence. That it’s common to every known culture. That it involves a symbiotic exchange between teller and listener — an exchange we learn to negotiate in infancy. 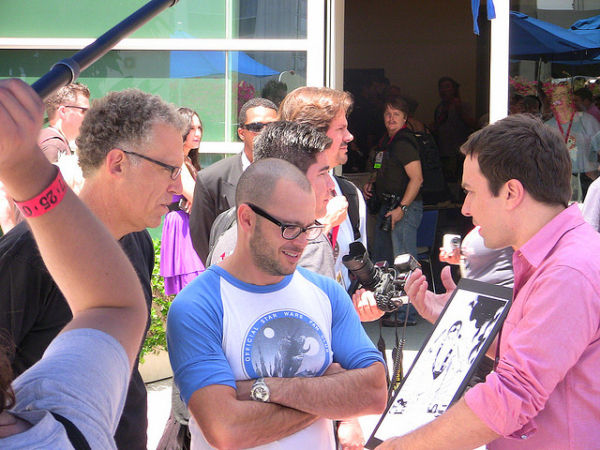 Horowitz — who with his writing partner, Eddy Kitsis, was an executive producer on Lost and a screenwriter for Tron: Legacy — remembers seeing Star Wars in Times Square with his mom when he was five. As soon as it was over, he wanted to go right back in. “But there’s no bigger Star Wars geek than Damon Lindelof,” he admits. . . .

Two years ago this month, as editors worldwide were beginning to debate whether anyone would actually go see Avatar, the $200 million-plus, 3-D movie extravaganza that James Cameron was making, Josh Quittner wrote in Time about getting an advance look. “I couldn’t tell what was real and what was animated,” he gushed. “The following morning, I had the peculiar sensation of wanting to return there, as if Pandora were real.”

It was not the first time someone found an entertainment experience to be weirdly immersive. . . .

BUILDING ON INSIGHTS from cognitive psychology and neuroscience, ‘The Sea We Swim In’ shows us how to see the world in narrative terms, not as a thesis to be argued or a pitch to be made but as a story to be told. This is the essence of narrative thinking. More about this book...

"Readers don’t need to worry that Mr. Rose was chewed up by Apple’s public relations machine. . . . He provides convincing proof that life at young California companies was anything but laid back."

IT SEEMS UNTHINKABLE TODAY—but some 35 years ago, when personal com­puters were still new and the World Wide Web had yet to be invented, Steve Jobs was cast out of Apple. And yet it wasn't just Wall Street that applauded—it was most of Silicon Valley. More about this book...