"The saga of Apple in its early years is a case study of the California style of creativity smashing headlong into the realities of Wall Street. Once again, Californians came up with a revolutionary idea which the Northeast seized control of and institutionalized. . . . Frank Rose has written the book on Apple and the entire Silicon Valley phenomenon."

— Kevin Starr, author of the eight-volume "Americans and the California Dream" series

"Zesty, highly readable . . . 'West of Eden' delivers a bracing keyhole view of a swarm of rich, talented people frequently at each others’ throats. The author . . . has a sharp eye for the painful contradictions in people's lives that make you glad he's profiling somebody else."

"Readers don’t need to worry that Mr. Rose was chewed up by Apple’s public relations machine. . . . He provides convincing proof that life at young California companies was anything but laid back."

"Rose’s tone is authoritative and wry. . . . His smooth and lively story captures better than any previous attempt the spirit of Apple under Jobs. . . . Of them all, 'West of Eden' seems most likely to endure as the definitive account of the convulsive period that saw Apple grow up."

"A vivid, intriguing portrait of an extraordinary community. . . . The Steven Jobs that 'West of Eden' describes would be a magnificent fictional character, an apprentice sorcerer with powers beyond his ken. . . . This is a gem."

IT SEEMS UNTHINKABLE TODAY — but more than 35 years ago, when personal com­puters were still new and the World Wide Web had yet to be invented, Steve Jobs was cast out of Apple. 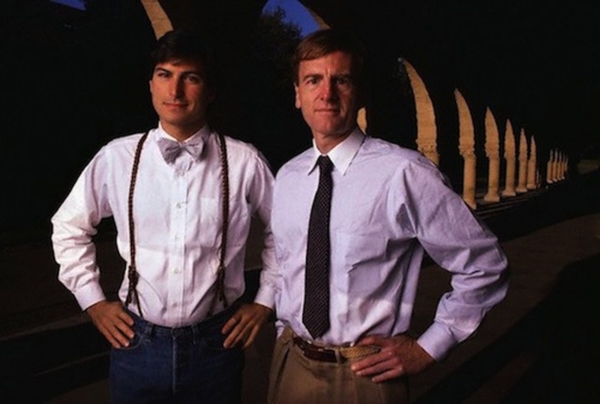 The year was 1985. Shunted off to a side project by the board, Jobs had led the development of the revolutionary Macintosh. But the Mac, launched with much fanfare just a year earlier, was foundering, a victim of marketing mayhem, Jobs’s own hubris and too little software. IBM and Microsoft seemed poised to dominate the world of personal computing. And Jobs seemed not just expendable but a threat to the company he’d built. Apple, started in a garage by two California whiz kids who’d taken as their emblem the “perfect fruit,” would now be run by a pin-striped East Coast marketing executive who styled himself a computer visionary. Wall Street applauded — and so did most of Silicon Valley.

WEST OF EDEN — first published in 1989, updated 20 years later with a new introduction — tells how Jobs lured John Sculley from Pepsi-Cola to lead Apple into the future, only to find himself pushed into exile by the man he’d thought would be his mentor. Based on extensive interviews with Jobs, Sculley, Apple’s vice presidents, the original Macintosh team, and many others, it is a story of America in the ’80s — when computers seemed strange and threat­ening, when conformity ruled in the corporate suites, when a desire to change the world was auto­matically suspect. It is the story of a visionary’s fall. ■

Named one of the ten best business books of the year by Businessweek  ●  San Francisco Bay Area best-seller  ●  Profile of John Sculley adapted from the book for California magazine  ●  New York Times Magazine profile of Alan Kay, the computer scientist whose work at Xerox PARC inspired the Macintosh

BUILDING ON INSIGHTS from cognitive psychology and neuroscience, ‘The Sea We Swim In’ shows us how to see the world in narrative terms, not as a thesis to be argued or a pitch to be made but as a story to be told. This is the essence of narrative thinking. More about this book...

NOT LONG AGO WE WERE SPECTATORS, passive consumers of mass media. Now we approach television shows, movies, even advertising as invitations to participate — as experiences to immerse ourselves in at will. What we’re witnessing is the emergence of a new form of narrative that is native to the In­ternet. More about this book...