Can ‘Heavy Rain’ live up to its grand intent? 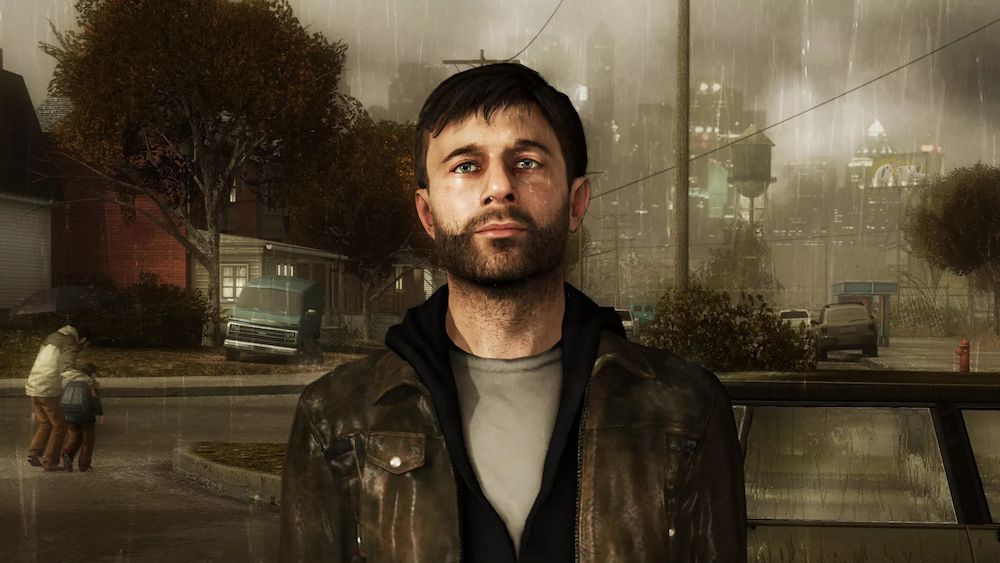 From the moment of its introduction at E3 2006, Quantic Dream’s Heavy Rain promised an experience games have never truly managed: Narrative at the fore, with gameplay built around a story rather than a story that’s wedged into the gameplay. Now that it’s out, it’s clear that Quantic Dream CEO David Cage has man­aged to harness the participatory nature of games to create some emotionally jarring scenes. Yet even so, Heavy Rain’s illusion of choice and consequence will not hold up for a seasoned gamer.

The story provides some tense and sometimes frightening moments. I agonized over two de­cisions that were required of me, going so far as to pause the game and ask friends and family what the best decision would be. Some action scenes almost make you feel like your life is actually in danger. And while video game morality is usually just a masquerade—choices that seem moral are really more about raising your “good” or “evil” stats—some of Heavy Rain’s choices offer real moral dilemmas. At the game’s best, these choices can considerably alter your experience. And the changes can be so seamless, you probably won’t notice that the game could have played out in numerous different ways.

The most innovative aspect of Heavy Rain are its quick time events. Failing a quick time prompt won’t necessarily kill you as it does in other games, but it will change the course of the action. If someone takes a swing at me, I will be prompted to block or dodge the onslaught. But whether I succeed or fail, the action will continue unabated.

There are other nice touches. Heavy Rain’s button prompts, for example, often try to mimic the action onscreen, even if only metaphorically. When sneaking around a suspect’s home, you will open doors, but to conceal your snooping you have to push the analog stick forward slowly as to not arouse suspicion. Other, more difficult sequences will have you strain your fingers into awkward positions, forcing you to hold down numerous buttons simultaneously, creating a real sense of panic and duress.

And there is no shortage of duress. Heavy Rain establishes its mood on the menu screen, which is backdropped by a gorgeously dreary, rain-soaked alley that soon becomes a sort of visual trademark for the game. Next you’re transported back to sunnier days in the life of Ethan Mars, the game’s primary protagonist. Like Quantic’s Indigo Prophecy (or Farenheit, depending on what hemisphere you’re from) before it, Heavy Rain has you perform a variety of mundane tasks in hopes that seeing the characters in ordinary situations—brushing their teeth, taking a pee, making coffee, setting the table—will generate a special bond. You get a sense of how important Ethan’s children are to him by watching him playing with their toys, peering into their bedroom or giving them piggy backs in the yard.

Tragedy strikes the Mars family early on, and once it does you’re slowly introduced to three other characters, each of whom you will directly control and each of whom play an important role in the investigation of the Origami Killer, the serial child murderer every character is after. You’ll play as Madison Paige, an intrepid reporter; Scott Shelby, a drunken private eye; and Norman Jayden, an FBI agent with an addiction to the fictional drug triptocaine.

This is where the problems with integrating story and gameplay first come up. More than once in Heavy Rain, you’ll be controlling a character in an environment he or she ought to be familiar with—but since you aren’t familiar with it, you end up acting in a way that’s contrary to how the character would act. Ethan should know his house inside and out, but since I’ve never been there before, I end up making Ethan walk along the wall until I receive a button prompt, or I explore the entire house to ensure I don’t miss any of the available interactions. Nearly always this breaks the illusion of interactive drama.

The game is broken down into scenes, much like a film, each one giving you control of a different character, sometimes in the presence of other controllable characters (which can seem a bit odd). Some scenes just involve conversation; others have you investigating crime scenes, and still others put you in a feverish quick time action sequence, usually with your life on the line. You don’t always have full control over your character—quick time sequences and cut scenes abound. But when you do, you can press a button to listen to your character’s thoughts. They might give you insight into the case, hints about what to do next, or background on individual characters. This little touch is a great way to feel more connected to your character. It also lets Heavy Rain get away with leaving out the customary head-up display.

In other scenes, however, awkward character controls and confusing camera positions constantly remind you that this is indeed a video game. When you first play as Norman Jayden, ducking under a crime-scene tape is a laborious task. First, he pauses to allow you to hit the necessary button prompt. A dramatic camera sweep follows, accompanied by some out-of-place orches­tration and stilted animation. Jayden then pauses, and finally you are given back direct control. Heavy Rain’s mundane tasks unfailingly come across as melodramatic and contrived.

A scene involving Madison at the Blue Lagoon nightclub highlights the game’s severe linearity. You’re required to accomplish a set of sequenced tasks to get the desired information, and if the tasks aren’t done just so, you cannot progress. The sequence is so predictable, it seems as though there must be some alternate route; sadly, there isn’t. If I, as a reporter, wanted information from a criminal, I might want to have a drink and loosen up. Sadly, the bartender doesn’t register my desperate X-button spamming. And when the game does offer you different ways to accomplish a given task, often the only thing that changes is the interim cut scene or the dialogue options; the conclusion frequently remains identical. Either Heavy Rain should provide you with intricate, intelligent puzzles to solve, or it should create scenarios in which the player has a legitimate say in how a problem is resolved.

Heavy Rain generated a lot of hype by promising realistic consequences for your actions, so that instead of a “Game Over” screen you’d be forced to cope with your failures. If you fail an entire scripted quick time event, or fail to find a clue to the identity of the Origami Killer, or choose one course of action over another—in all those cases, either your character or a central non-player character could lose their life. Making a wrong choice, or being unperceptive, could dramatically change the ending of the story.

Yet to an experienced gamer, it is almost always obvious what the optimal outcome is. Of all the possible paths in any given scene, too many look like failures. And because it is fairly difficult to fail quick time events or miss clues unintentionally, even on the hardest settings players will inevitably find themselves on a more or less similar story arc. If Quantic Dream is serious about imitating life, either they have to make scenes less predictable, or they have to provide many more meaningful, “successful” endings and not as many binary ones.

The dichotomies in Heavy Rain’s branching narrative structure do enough to pull you out of the experience, so it doesn’t help that the graphics often get lost in the uncanny valley. Environments and character models are exquisitely built, but the characters have a difficult time expressing emotion. Sometimes they look almost grotesque as their faces contort into oddly inhuman shapes. (Paige’s smile during the Blue Lagoon sequence is particularly unnerving.) And because almost every fight sequence moves much slower than it should, you get the distinct feeling that these actors didn’t rehearse enough before they went in front of the green screen. So even though Heavy Rain is focused on drama and emotion, Resident Evil 5 easily wins out in terms of graphical realism.

But Heavy Rain‘s worst enemy is its own medium. This is a video game that demands that you forget the habits you’ve learned from gaming in order to engage with it properly. You must forget exploration, forget “getting things right”, forget about actually “beating” a level, and forget “game overs.” Instead, you have to think as if you were the character you are controlling. In theory, this should be a good thing. Yet at the end of the day, it’s impossible to let yourself go and forget you’re playing a game. While playing through the story, you keep exploring environments and dialogue trees until all actions have been exhausted. And while unlearning old gaming habits would be hard at the best of times, it’s all but insurmountable when Heavy Rain’s gaming architecture is so blatantly visible after even the slightest prod.

Ultimately, any drama lives and dies by its story, and this is where Heavy Rain struggles most. At this point, emotionally stunted serial killers with traumatic childhoods and a penchant for random “call signs” are rote character molds. And so it is that you get the feeling when playing Heavy Rain that you’ve seen this story before. Meanwhile, the killer’s motives and methods are perforated with unexplained holes, and the female lead was quite transparently written by a man. (In the very first scene with Madison Paige, we are not so much introduced to her character as we are to her breasts.) Combine this with a vacuous love story and it’s enough to turn off most intelligent adults.

If you can look past the stilted animations and the shallow storyline, you may be able to engross yourself in Heavy Rain’s world. But if you remember, even briefly, that this is a video game—and what with its inner workings clanking just below the surface, it would be hard not to—the illusion of real choice and consequence quickly disappears. Unfortunately for those seeking a brave new world of interactive fiction, Heavy Rain mainly succeeds in demonstrating how far from our grasp its grand ambition remains.

While I haven't played the full game, I had similar reservations about the demo. I wrote a piece on my serious games blog fretting about the fact that the player is often left unsure what each button / control gesture will actually do, and the result is a break from immersion as the avatar performs an unexpected action. Until there's a control system that more accurately reflects the onscreen actions (hello, Natal and PS Move!), I don't think Heavy Rain's grand vision can be fulfilled.