‘Flynn Lives’: The care and feeding of ‘TRON’ 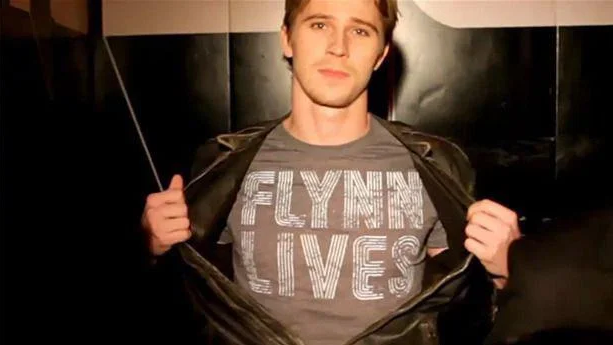 It used to be that after the movie was shot, the actors went home. But last spring, months after TRON: Legacy had wrapped, I found myself on the tarmac at Oakland Airport with Garrett Hedlund, who plays Kevin Flynn’s daredevil son in the upcoming movie. A camera crew was on hand to shoot Hedlund as he packed up a parachute in front of a black helicopter with a bright red “Encom” logo emblazoned on its side. This time Hedlund was playing Sam Flynn in a video that would be “found” online a day or two later, explaining the bizarre events at an Encom press conference and, by the way, introducing his character to TRON fans. Directing the whole operation was Susan Bonds, the head of 42 Entertainment, the company behind the alternate reality game Flynn Lives.

I was on hand to report on this for my book, The Art of Immersion (current and final title), which is being published in February by Norton. But I was also starting to think it would be a fun topic to explore in a public forum, which is why I’ve proposed a discussion on the topic for SXSW Interactive in March. The tentative line-up for the panel is Susan Bonds; TRON: Legacy producer (and Disney production chief) Sean Bailey; and screenwriters Adam Horowitz and Eddy Kitsis, who were also executive producers of Lost. The proposal is up for voting until August 27 at the SXSW Panel Picker.

Flynn Lives is 42 Entertainment’s biggest ARG since Why So Serious?, the game that led up to The Dark Knight. But Batman had been around for nearly 70 years, so the main task that game had to accomplish (aside from generating excitement about the movie) was to tie the new film into the saga. TRON has been on hiatus since the original movie came out in 1982, and story was hardly its most memorable feature even then. What people remember about it is the visuals—the powerful, abstract iconography of the grid and the lightcycles coursing through it—and the idea of being sucked into a computer and living in a purely digital world. Making all this real has been the primary focus of Flynn Lives.

Being digitized was not exactly a mainstream concept in 1982, but it was of a piece with the computer fascination of the times. IBM had come out with its PC the year before, “legitimizing” the personal computer for business users who considered the Apple II a toy. Japanese arcade games—Namco’s Pac-Man, Nintendo’s Donkey Kong—ruled at the mall. The Soul of a New Machine, Tracy Kidder’s book about rival teams of computer engineers, became a best seller. Come December, Time magazine would change the rules of its Man of the Year competition to name the computer “Machine of the Year.”

At the box office, however, E.T. ruled. TRON did only slightly better than Blade Runner, which opened two weeks earlier and grossed a pathetic $24 million. When a clueless financial analyst dismissed TRON‘s cutting-edge computer effects as “distracting” and put a sell sign on Disney’s stock, the company ended up in a takeover battle that eventually ended with Michael Eisner in charge. In the years that followed, as Disney morphed from a sleepy little animation studio with a sideline in theme parks to a global media conglomerate pulling in tens of billions of dollars annually, TRON slowly gained cult status. But not until Sean Bailey got involved did anyone figure out how it could work as a movie franchise.

Bailey brought in Horowitz and Kitsis, who envisioned the new TRON not as a remake but as a sequel—a son’s quest to find a father who’s been missing for some 20 years. He brought in Joseph Kosinski, known for bringing stunning computer graphics to advertising, to direct. And he brought in Susan Bonds and Alex Lieu, 42’s creative director, to take the story beyond the movie screen. This is what they specialize in; it’s also the kind of thing Bailey has wanted to do for years. When he co-founded LivePlanet a decade ago with Ben Affleck, Matt Damon, and Chris Moore, it was with the idea of telling stories that played out not only onscreen but also online and in the real world. So when Disney greenlit TRON, he showed Horowitz and Kitsis the 2008 Wired story on Year Zero, 42’s collaboration with Trent Reznor, which began with coded T-shirts and leaked songs on a European tour. As Horowitz told me later, “We were like, They put this [USB drive] in a toilet stall in Lisbon and someone found it? No fucking way!”

Flynn Lives began at the 2009 Comic-Con with a full-scale realization of Flynn’s Arcade, the mothballed video game hangout from the first movie, and a lightcycle from the new one. Hedlund made the helicopter video for phase two, which culminated in his character’s parachuting into a San Francisco press conference at which Alan Bradley (that is, Bruce Boxleitner) announced Space Paranoids Online, based on the fictional title from the original movie. At this year’s Comic-Con, fans got to see new footage from the movie and visit the End of Line Club, a nightspot for computer programs in cyberspace.

“We always thought of TRON as a world that was so much bigger than any one movie,” Horowitz said. “In a movie we’re only on one part of the grid,” Kitsis added. “But there are other parts of the story to tell on other grids. That’s what’s so great about today—you really can live in that world.” Explaining how it happens is what we intend to do at SXSW.

The Soul of a New Machine