Fairey and Lessig at the library: Hope and theft 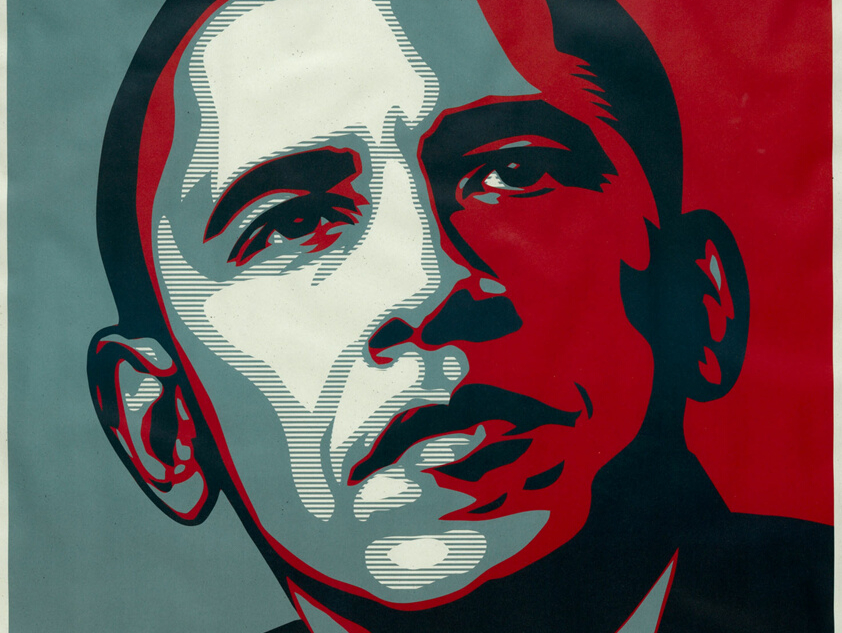 For anyone interested in how digital technology is changing storytelling — and every other creative endeavor — last Thursday’s “Remix” discussion between Lawrence Lessig and Shepard Fairey at the New York Public Library was beyond fascinating. The evening was occasioned by the legal row about Fairey’s iconic “Hope” poster, which he based on a three-year-old photograph of Barack Obama taken by an AP photographer in Washington. With the Associated Press threatening legal action for alleged copyright violation, Fairey filed suit earlier this month seeking a ruling on the issue. At the NYPL event, sponsored by Wired, he joined Lessig for a discussion moderated by Steven Johnson, author of the newly published Joseph Priestley biography The Invention of Air. What could have been a run-of-the-mill complaint about copyright abuse turned instead into a lively give-and-take on the dual modes of pop culture that are slugging it out today: passivity v. participation. Or put another way, old media v. deep media.

One of the problems with the term “old media” is its implication that mass consumption of corporate content – newspapers, TV shows, what have you – is simply the natural order of things. In fact, it’s a 20th-century development. The culture of the Enlightenment, as Johnson pointed out at the library, was based on the idea that thought should be freely shared. People like Priestley, Jefferson, and Franklin borrowed from one another constantly. Or as Johnson observed before the event on the NYPL’s blog, “The Enlightenment happened in large part because the systems that we now use to police and regulate the flow of ideas simply hadn’t been invented yet.”

In his new book,Remix: Making Art and Commerce Thrive in the Hybrid Economy, Lessig too treats mass media as an historical aberration. At the library he invoked first Aldous Huxley and then John Philip Sousa, whose 1906 attack on the phonograph industry is strangely resonant today. “These talking machines are going to ruin the artistic development of music in the country,” Sousa testified before Congress. “When I was a boy…in front of every house in the summer evenings you would find young people together singing the songs of the day or the old songs. Today you hear these infernal machines going night and day. We will not have a vocal chord left. The vocal chords will be eliminated by a process of evolution, as was the tail of man when he came from the ape.”

Lessig has used the Sousa quote before, most notably at TED. But this time he pressed the point home by following it with a short video of 13-month-old Holden Lenz dancing across his parents’ kitchen floor, a Prince song barely audible in the background. Holden’s mom posted the video on YouTube so her friends and family could watch it, but in so doing she ran afoul of the copyright police. Within months, an attorney for the Universal Music Group – the world’s largest music company, responsible for everyone from U2 to 50 Cent to, yes, Prince – sent YouTube a takedown notice: The dancing-baby video, it seems, constituted an unauthorized performance of Prince’s music.

This is a stance so absurd it can only be explained as a manifestation of group hysteria. The people who threaten Shepard Fairey and Holden’s mom imagine themselves as fighters against piracy, but what they’re really doing is working to protect 20th-century mechanized media from an onslaught of creativity that looks to them like theft. Newspapers – the industry served by the AP – are threatened by any number of forces, from massive debt to the years of cuts required by their owners’ addiction to double-digit profit margins. But a big reason they strike many people as irrelevant is that their editors are so accustomed to speaking to readers from on high that they can barely imagine how to engage them in a dialogue. As for the music industry, its increasingly tortured logic seems inspired by a fear of what will happen when “the songs of the day” are not just passively consumed but used as creative fodder.

Creativity and copying have long been bound together, a point driven home during the library discussion by a brief slide show that paired Velasquez’s Innocent X with Picasso’s, Millet’s Reaper with van Gogh’s. Wim Wenders made the same argument several years ago at a discussion I moderated at Cannes: “I am a little scared of [piracy] becoming too difficult, for one simple reason,” he said. “I grew up as a pirating kid. It was even before television. I had inherited a crank projector and a box of eight-millimeter films from my dad, all Charlie Chaplin and Buster Keaton stuff…. And when they got too bad, because I showed them hundreds of times, I started to cut them up, and I found this little machine – my friend had one – that could paste them together and make new movies out of them. And it worked beautifully – Buster Keaton and Charles Lloyd suddenly interactive was fantastic! So I am very, very scared that for a contemporary generation of kids, that possibility to take it and use it and do what they want to with it is all of a sudden gone, because they block it all and it is out there but you can’t eat it anymore and use it for your imagination.”

In other words, what’s bad for control is good for creativity. And the copyright panic that media companies are experiencing today is less about theft than about the rise of participatory culture – and the challenge it poses to the way they do business.

The Invention of Air