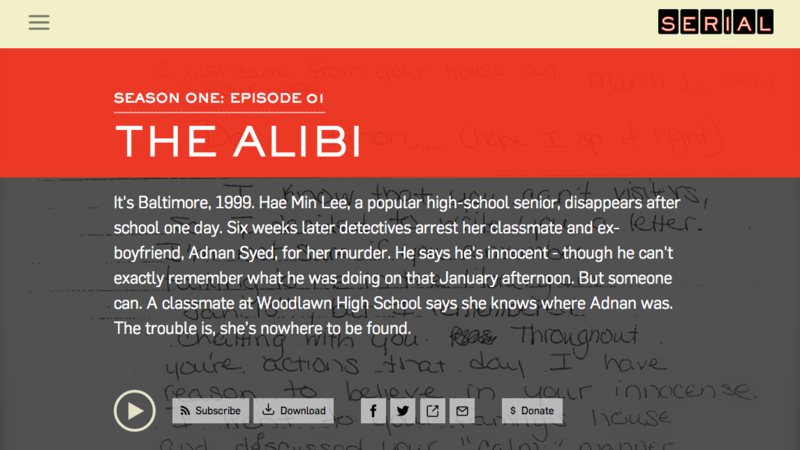 For anyone who follows not just stories but meta-stories—that is, stories about storytelling and how it’s evolving—2014 was a pretty big year. Along with twelve months of shootings, bombings, protests, invasions, and epidemics, we’ve witnessed profound changes in the way journalism and entertainment alike are being presented to us. Some of these developments have been building for years; others came out of the blue. Before we go rocketing into our next revolution around the sun, let’s pause for a brief recap.

When Oculus VR was acquired by Facebook for $2 billion in March, just three months after raising $75 million in its second round of funding, it became inescapably clear that virtual reality was about to go from gearhead pipe dream to, well, something almost real. The Facebook deal also suggested that VR was going to be about much more than games—a point Oculus itself chose to highlight when it held its first developer conference not in San Francisco or downtown LA but in Hollywood. For me, the storytelling potential of VR was obvious from the moment I experienced “Ascend the Wall,” the Game of Thrones VR experience that played at SXSW. At Oculus Connect it became apparent I wasn’t alone. In a panel moderated by Eugene Chung, the recently hired director of film and media at Oculus, John Gaeta of Lucasfilm said the studio was experimenting with VR for Star Wars. In another discussion the pioneering video director Chris Milk said, “The profound thing about virtual reality is the immersion of it—and how interactive it has to be immediately is up for debate.”

Last April’s announcement that Comedy Central’s Colbert Report would close and its host would replace David Letterman on CBS meant that regardless of whatever else happened, 2014 would mark the end of an era on TV. For nine years, the comedian Stephen Colbert had remained in character and on point as the ridiculously self-important right-wing talk show host Stephen Colbert. People like Jimmy Kimmel and Jimmy Fallon figured the conceit would last six months if it worked at all. Instead he won six Emmys, testified before Congress, roasted George W. Bush so mercilessly the White House got mad and the press corps tried to pretend it didn’t happen, and made “truthiness” the household word it so richly deserves to be. Here’s hoping he has half this much bite on The Late Show.

With disaster and civil-unrest videos instantly uploaded to YouTube and world leaders issuing statements on Twitter, the journalistic potential of social media has been apparent for years—even as TV news has devolved into a cavalcade of bloviators facing down a tide of mush. (I’m talking Fox News v. CNN, in case there’s any doubt.) This year the balance finally shifted for good.

The signal moment came in mid-July, when NBC News yanked veteran correspondent Ay­man Mohyeldin off the air after he live-tweeted photos and commentary as four children in Gaza were killed an Israeli attack. His tweets quickly went viral—as did the outrage over his removal. But the irony was that Mohyel­din’s tweets seemed to have more impact than the minute or two he was allotted on the nightly news. As the media critic David Zuwarik noted in The Bal­timore Sun, “Mohyeldin, more than any other journal­ist, embodied the tension within journalism itself as gatekeepers hewing to traditional standards lost their last vestiges of control to social media this year.”

4. HBO goes over the top; CBS and Univision follow

Elsewhere in television, there was real news. In October, HBO CEO Richard Plepler announced at an investor conference that in 2015 the premium cable network would “launch a stand-alone, over-the-top, HBO service in the United States”—no cable subscription required. Details, like when it would be available or how much it would cost, were sparse. But the impact was compounded the next day when CBS announced that for $5.99 a month, viewers would be able to get its pro­gram­ming online as well—starting immediately. Hours later, Univision declared that it too would be launching a streaming service. In truth, neither move was a total surprise: HBO had announced a similar service in Scandinavia two years earlier, and CBS chief Leslie Moonves had repeatedly declared himself ready to move beyond broadcast and cable with an online offering. Nonetheless it was a critical moment—a jailbreak that constitutes the first major step in the industry’s glacial yet inevitable progression from linear television to streaming Internet video. Years from now, when Comcast is known as a provider of fiber-optic Internet connections and cable is something they use to hold up bridges, we’ll look back on this with gratitude.

So yes, these days we expect to participate in stories, not just consume them. But what if the story involves real people with friends and family and social media accounts, just like the rest of us? And what if it combines two of the most immersive, engaging forms of storytelling around—the serial, which comes at us week after week, and the police procedural, which all but demands that we step in to solve the crime? Welcome to Serial, the podcast from This American Life that showed how sticky things can get when a true crime story hits the Net.

In building a weekly podcast around the murder of a high school stu­dent whose ex-boyfriend was convict­ed of the crime and sentenced to life plus 30 years, pro­ducer Sarah Koenig al­most inad­vert­ently hit pay dirt. Never mind that the story was more than a decade old by the time she got to it; there were enough loose ends—largely cir­cum­stantial evi­dence, no eyewitnesses to the actual kill­ing, a man pro­claiming his in­nocence—that time didn’t mat­ter. It was the idea that counted, and the execution.

Listening to audio books on a long drive, Koenig told Vulture, “it hit me that those were the audio stories I liked the best—sustained narratives that you can lose yourself in for not just minutes, but hours and hours. And I thought, Why don’t I just try to create a show that replicates the experience of a book on tape?. . . The only difference is if I was writing a book, I would do all the reporting first and then organize it like a normal person and then publish it, but here, I am releasing my work as I go, which is sort of crazy, I realize.” Crazy-brilliant, as it turns out: Puzzling it out in real time and in great detail enabled her to pull listeners along for the ride. In the process she created the most popular podcast ever—one that, as Dwight Garner put it in The New York Times, “uprooted the way murder mysteries are usually told” and made us “feel the occasional tingle of campfire-narration awe.”

It’s never easy to make the transition to digital—but earlier this month, when Facebook not-quite-billionaire Chris Hughes was faced with a mass walkout at the New Republic two years after he’d bought it, it became obvious that there’s a right way to go about this thing and a wrong way. Hughes chose the wrong way, installing a tone-deaf Yahoo executive named Guy Vidra as CEO and searching for an editor to replace Franklin Foer even as he assured Foer and his staff that no change was in the offing.

According to an account by Ryan Lizza, one of those who left, Vidra immediately distinguished himself by calling a staff meeting at which, working from a PowerPoint presentation, he uttered vague clichés about innovation and magical experiences, failed to mention the publication’s rich editorial heritage, and famously announced the need to “break shit” without bothering to specify what shit he planned to break. This performance, itself a study in executive arrogance, was followed by a series of incidents that left the editors thinking Hughes was losing interest in the perennially money-losing publication and/or freaking out over how much it was costing him. When Foer learned that Hughes had hired a former Gawker editor to replace him, he and literary editor Leon Wieseltier quit. Most of the other senior staffers followed them out the next day, taking their articles with them. Hughes was shocked: How could this have happened?

There is in fact a precedent for old-line literary and policy journals moving successfully into the digital age—just look at The Atlantic, which began publication before Lincoln was elected president. Could the New Republic have managed the same feat without blowing itself up? Probably—but we’ll never know. The only thing this mess proves is that Chris Hughes is a seriously abysmal manager.

7. ‘The Interview’ demonstrates yet again the enduring power of story

Meanwhile, over in Hollywood, 2014 was shaping up as a “meh” sort of year—no overpowering hits, no spectacular bombs, just the usual parade of mega-budget sequels playing to audiences that weren’t as big as they’d been before. Until December, that is, when the mysterious online attack on Sony and its upcoming Seth Rogen-James Franco farce suddenly threatened to implode the whole industry. What began juicily enough with executive salary tidbits and emails dissing Angelina Jolie turned very dark very fast when the so-called Guardians of Peace threatened a wave of 9/11-style terror attacks if the movie opened as scheduled on Christmas Day. The US government confirmed speculation that North Korea was behind it all: Apparently the leaders of that ultra-paranoid half-nation were upset—really upset—that Rogen in his unbridled genius had made a movie about the assassination of Kim Jong-un. The big theater chains said no thanks, the other studios remained silent, Sony pulled the plug, and that appeared to be that.

Except it wasn’t. Over the next few days, North Korea’s extreme reaction to the power of story transformed a doofus comedy that seemed to have little going for it into a potent symbol of free speech. Then President Obama weighed in, the White House declared the matter a “serious national security issue,” and Sony decided to release the picture after all. A few hundred indie theaters braved the threat, but most people who watched the movie did so at home via streaming services operated by Google, Microsoft, Apple, and Sony itself. Over the four-day holiday weekend The Interview took in $18 million—$3 million in theaters and the rest online, making it Sony’s most successful online release ever. Which is how a bizarre hacker threat had the unintended consequence of jump-starting the online release of Hollywood movies.

"Zesty, highly readable . . . 'West of Eden' delivers a bracing keyhole view of a swarm of rich, talented people frequently at each others’ throats. The author . . . has a sharp eye for the painful contradictions in people's lives that make you glad he's profiling somebody else."