B Positive? Guillermo del Toro and Chuck Hogan have something special in mind for you 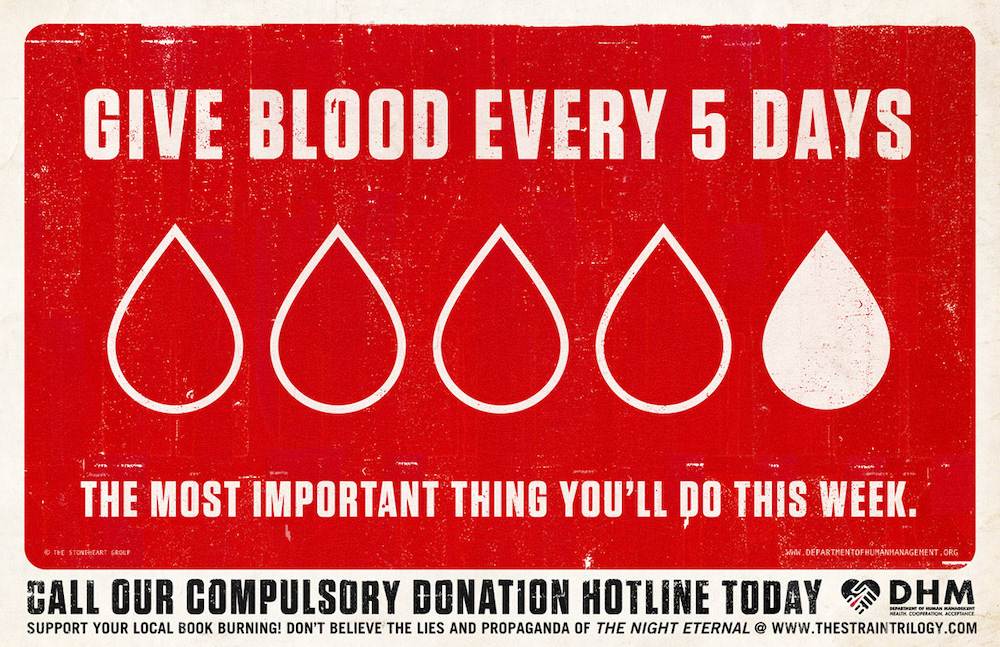 If the term Department of Human Management gives you a bit of a chill, check out the Web site. At departmentofhumanmanagement.org, you will find in­for­mation on such topics as How To Live (“your guide to living, connecting, and inter­acting with our new environ­mental factors”) and an About Us page that talks about creating “a support system for citizens to up­hold our new status quo.” A hint as to what that status quo involves comes from the bright red badge at the bottom of the page: “Give Blood Every 5 Days.” Another hint comes from the crawl at the top: “Ignore the lies and propa­ganda of The Strain Trilogy.”

The Strain Trilogy, of course, is the horror series written by Guillermo del Toro and Chuck Hogan, the final volume of which was published last week. It’s all about vampires, but not of the Robert Pattinson variety. The Strain vampires are about as hunky as the “prawns” in Neill Blomkamp’s District 9. They are sexless creatures with no hair, atrophied facial features, and a stinger under the tongue that has a range of six feet. The stinger feeds them, and the stinger infects you. Capillary worms enter the bloodstream, and in 24 hours a perfectly normal human becomes an undead vampire drone.

The runaway epidemic introduced in The Strain (volume one of the trilogy) led to total disaster in last year’s The Fall. By the time we get to The Night Eternal, which completes the trilogy, Earth has been consumed by a nuclear holocaust that blots out the sun. A vampire overlord rules the darkened planet. Life for the surviving humans has turned, well, grim. The Depart­ment of Human Man­age­ment is there to ease the way. Its motto: “Health. Cooperation. Ac­cep­tance.”

Created by Mirada, the studio del Toro opened last year with Mathew Cullen and Javier Jimenez of the LA ad shop Motion Theory and cinematographer Guillermo Navarro, the DHS site takes the fiction a bit farther than the books do. If humans were essentially reduced to cattle for the vampires to feed on, how would that work? The concept was developed by Andrew Merkin, who joined Mirada earlier this year after getting a master’s from MIT’s Comparative Media Studies program. “I was pushing hard to focus on the world-building aspect,” he says. “You can imagine what this means, but you’re not quite sure.”

It turns out to mean a lot of blood donation—too much, in fact. The average adult has about 10 pints of blood. The human body requires approximately 30 to 40 days to fully replace a lost pint. A person begins to go into shock at the loss of three pints or so and cardiac arrest at the loss of more than four. A pint every five days? You do the math.

But DHS is not all doom and gloom. The site likes to focus on the bright side of human management, with cheery posters and useful guides like “6 Tips for a Healthy Body” and “What To Do During Your 2 Hours of Day­light.” Person­ally, I like the video tes­ti­monials—like “Meet B Positive Singles,” which intro­duces us to a healthy young cou­ple with an extra-tasty blood type.

“B-positive is the Kobe beef of blood types,” Merkin explains. “The one that vam­pires love the most.”

So the young couple are breeders. But hey—that’s all right. They have lots of sex, and they get better food rations to boot. “I’m proud to look forward to a healthy, reproductive future,” Matthew declares. Katie looks at him adoringly, even as she’s fighting back tears. Yes, it really is too bad the babies will be vampire food.

From the moment H.G. Wells published The War of the Worlds in 1898, much of the best science fiction has been about humans being overpowered by a pitiless, alien force—a force that ends up treating us more or less the way we treat animals. This provides dependable fodder for dramatic action and is subject to endless variations. But it’s also an intriguing thought experiment, propelled I suppose by equal parts guilt and fear. (Wells said The War of the Worlds—in which invading Martians overwhelm the mighty British military and terrorize Victorian London—was sparked by a conversation he had with his brother about the subjugation of Tasmania by colonialist forces.) An important subtheme in many such stories is what use the humans are put to after their inevitable subju­gation. In The Matrix, their bodies provide an energy source. In The Strain Trilogy, it’s nourishment.

The DHM site is one of the first projects to emerge from Mirada, following Chris Milk’s “RO.ME”—an experimental music video produced by @Radical Media, with Mirada providing 3-D animation and conceptual design—and IBM’s THINK exhibit, an interactive experience in New York’s Lincoln Center. As for del Toro, he’s shooting Pacific Rim, his robots-v.-monsters film, which is set to open next May 10. Last summer at Comic-Con, he promised “to film the finest fucking monsters ever committed to film”—and also “to create the greatest fucking robots ever committed to film.” Best not to donate too much blood if you want to see it.

"As we’ve witnessed in the rise of conspiracy theories around the coronavirus and presidential election over the past year, science and rationality can be trumped by powerfully told, emotionally appealing, and endlessly repeated narratives that are contrary to verifiable facts. We can say that such narratives are divorced from reality, but as Frank Rose writes in ‘The Sea We Swim In,’ ‘reality is a construct, and narrative is the chief means of construction.’"

The War of the Worlds