Immersion 101: How Punchdrunk’s “Sleep No More” turns theater on its ear 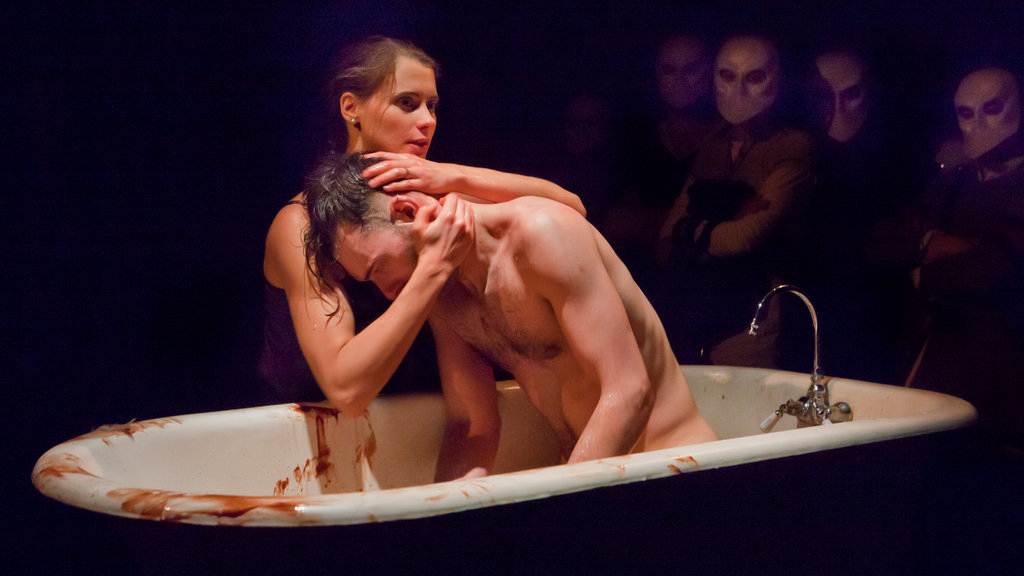 In March 2011, when London’s Punchdrunk Theatre Company opened Sleep No More in an abandoned warehouse block in New York, few imagined it would still be running a year later. A strangely wordless interpretation of Macbeth as filtered through film noir with a nod to Hitchcock, Sleep No More defies every convention of theater. It has no stage, no seats, takes place in a labyrinth of oddly decorated rooms, and requires audience members to wear Venetian-style masks but gives them no clue how to respond to what’s going on—which can be anything from nothing at all to a naked man in a bloody bathtub.

“What is it?” asked Punchdrunk producer Colin Nightingale over breakfast the other day. “An art experience? A piece of theater? Nightlife? We don’t want to tell you. We think our audience is intelligent enough to work it out.” Apparently they are—for not only is Sleep No More still running, it’s playing to sellout crowds. The best explanation anyone can come up with: It’s immersive. Surreally, voyeuristically, even hypnotically immersive.

People have always wanted to immerse themselves in stories, and digital media have given them any number of ways to do so, from Grand Theft Auto and L.A. Noire to alternate reality games like Why So Serious?, which drew more than 10 million people into the saga of The Dark Knight before the movie opened. But the desire for immersion has spilled over into the purely analog world as well, as Sleep No More attests.

For Nightingale, Sleep No More is part of a journey that began on a random day in 2002. He was walking through an art fair in South London when he stumbled across Punchdrunk’s first major project, an adaptation of Eugène Ionesco’s absurdist farce The Chairs. “I walked through a door, into another world, and out the other side,” he said. Apparently he would not be the same again.

Punchdrunk was the brainchild of Felix Barrett, who as a student at Exeter University had recently started thinking about how you could break down traditional expectations of theater. Nightingale was a DJ who liked to throw warehouse parties in the dicier parts of East London, providing his guests with hand-drawn maps that were slightly wrong. But he was looking for something more, he said, “and when I went into Punchdrunk I felt, this is it.”

“With clubbing, you’re very much at the center,” he went on. “It’s not like you’re sitting in a theater. I don’t think anybody should underestimate the impact that had on a generation of people.”

Punchdrunk went on to produce several large-scale events in the UK—among them an adaptation of Goethe’s Faust, which The Observer called “one of the most astonishing events, not just in the theatre, but in the whole of London”—but none of them quite on the scale of Sleep No More.

That’s partly a function of real estate. As a site-specific theatrical production, Sleep No More depends on the producers finding a location big enough to contain it.

Punchdrunk may finesse that issue, however, with another type of production it’s planning: Punchdrunk Travel. The idea is to have people turn up at the airport with nothing more than their luggage and a locker key. Their destination and everything else about their travel experience would be revealed to them in due course.

What this creates is a story with no boundaries. “When people have no idea what they’re doing, it heightens the real world for them,” Nightingale explained. “They have no idea what’s part of the story and what’s not.”

Which is precisely the way he likes it. “I want there to be a hidden door,” he continued. “A rabbithole to fall through. I want to believe there’s more.”

This afternoon at 3:00, I’ll be exploring this at South by Southwest Next Stage with Susan Bonds, CEO of 42 Entertainment (the group behind Why So Serious? as well as Legends of Alcatraz, the latest installment of which played out in Austin yesterday), and Paul Woolmington, founding partner of the branding agency Naked Communications. We’ll be deconstructing five different media experiences, Sleep No More among them, in an attempt to explain what makes them work—and in particular, what makes them work right now.