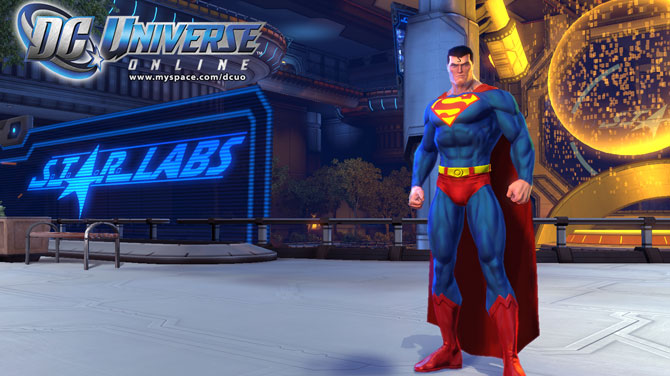 Those razor-beaked flying squid that terrorized divers off San Diego last weekend were not — repeat, not — mutant escapees from DC Comics’ S.T.A.R. Labs. But plenty of equally unlikely creatures, from 30-foot gorillas to alternate-dimension space amoebas, will likely emerge from the disaster-prone research center once Sony throws open the doors of DC Universe Online, the massively multiplayer online game that will let players fight alongside famous DC characters.

“S.T.A.R. Labs is an adventure zone,” said DC’s Jim Lee, offering an exclusive preview of a panel coming to Comic-Con International on Saturday morning. “The Stories of DC Universe Online” promises to give gamers an idea what to expect from the MMO, which should be released some time next year for PC and PlayStation 3.

Revered by fanboys as the illustrator of such hit titles as Batman: Hush, Lee is executive creative director of DC Universe Online, responsible both for its overall look and its faithfulness to the DC ethos. Also braving the calamari-infested city for the panel will be DC’s Marv Wolfman, one of the game’s chief writers, and creative director Jens Andersen and senior producer Wes Unagi, two key figures from Sony Online Entertainment’s studio in Austin, Texas.

DC Universe Online is designed to be as action-packed as a DC comic, with players choosing their own superpowers and tangling with the publisher’s mighty roster of heroes and villains. But story is critical as well. S.T.A.R. Labs serves both goals. “It’s the site of every crazy experiment gone awry,” Lee says. “So it allows people to have adventures that are very superheroish.”

Short for Scientific and Technical Advanced Research Laboratories, the facility was introduced in the 1970s and moved into the spotlight with Wolfman’s New Teen Titan series in the ’80s. Among other things, it’s where Victor Stone was transformed into Cyborg by his father after a scientific screw-up left the rebellious teenager mutilated by a gelatinous monster. Victor’s mother was killed in the attack, and Victor himself was none too happy about his new prostheses.

“For the last 25 or 30 years, S.T.A.R. Labs has been the major science center of the DC Universe,” Wolfman explains. “It’s where mistakes always happen.”

It’s also one of the few places where superheroes and supervillains can encounter each other on more-or-less neutral turf. Most other locales — the Justice League of America’s Watchtower, for instance — are the domain of one side or the other. As a result, S.T.A.R. Labs was identified early on as an ideal spot for launching new storylines within DC Universe Online.

The new game will also take advantage of the narrative power of MMOs themselves. “A lot of single-player games are very linear,” says Chris Cao, who heads the team that’s developing DCUO at Sony Online Entertainment’s studio in Austin, Texas. “Even games with branching storylines are basically linear.” That limited the possibilities for telling stories: Almost the only way to advance a narrative was to take the controller away and make the player sit through a video sequence. But as advances in artificial intelligence and physics enabled developers to come up with more sophisticated games, the tension between game and story began to diminish.

No longer was it necessary to limit players to a linear sequence of actions — open a door, enter a room, kill a bunch of enemies, repeat ad infinitum. You could give them some freedom. And instead of telling the story through cut scenes, you could introduce the characters, set out some conditions, and let the story evolve from the gameplay. This took gamers into the realm of emergent properties. “In Grand Theft Auto and other open-world games, the stories are completely emergent,” says Cao.

With MMOs, even more so. “In a game like DCUO, emergence is going through the roof,” Cao maintains. “Stuff you wouldn’t predict is happening, and the world feels more real because of it.” In the process, storytelling becomes both more natural and more important. “In a single-player game, it’s my own experience. In a multiplayer game, the experience is shared. A shared world creates stories that people tell each other. These stories come from what we experienced together, versus what the designer intended us to do. It shifts from me affecting the world to me and my friends talking about what we did together. It’s like serial television versus sports — the narrative is us.”

Unlike Marvel Universe Online, the rival MMO that was jettisoned by Microsoft Game Studios more than a year ago and recently revived by a San Francisco Bay Area startup called Gazillion Entertainment, DC Universe Online was never envisioned as a game in which players would assume the identities of superheroes. “You wouldn’t want to have 200 Batmans flying around,” Lee says. “Here, you’ll be creating your own legend.”

Given that the DC Universe is a place where justice ultimately triumphs, however, would-be villains could get discouraged. “We want to make it fun to be either a hero or a villain. But it’s a challenge to make them equal in terms of excitement and reward. If you choose the villain route and you have a mission that involves killing scores of innocent people — how much do we want to encourage evil behavior? Do you ever succeed in your villainy? That’s stuff we’re still deciding.”

Stories will also unfold differently depending on which of the 100-plus DC characters in the game you’re interacting with. “If you go up against a villain with Superman, it will play out one way,” Wolfman says. “And if you do it with Batman it will be completely different, because Batman approaches things differently.”

Wolfman’s job is to come up with major storylines — cases for heroes to solve, crimes for villains to commit. Under his direction, Sony developers in Austin are teasing those out into a seemingly endless array of mini-narratives in which players are sent out on missions: short bursts of action, often only a minute or two long, with even briefer bits of dialogue to advance the story. Cases and crimes alike take place within an overall story arc devised by Geoff Johns, the DC writer who’s been primarily responsible for the Green Lantern series in recent years. Among other things, Johns had to come up with a back story that explains why the DC Universe is suddenly flooded with new heroes and villains — the avatars created by players.

Details are still under wraps. All anyone will say is that narratives from the comics will not be reprised in the game. “But there will be echoes of those stories in the game,” Wolfman says. “If Superman goes up against Doomsday, you know what he has done in the past.” Things could work the other way around, however, with stories from the game and even user-generated characters appearing in DC comics. “That’s my hope,” says Lee. “That’s the payoff. To have your character in print forever is a very cool achievement.”

In the meantime, players will find themselves in an idealized version of the DC Universe — one in which Clark Kent is Superman and Bruce Wayne is Batman, even though in recent comics Wayne has apparently been killed and Batman’s cowl has been assumed by Dick Grayson, better known as Robin. As for Clark Kent, he’s still a mild-mannered reporter at the Daily Planet, though with the crisis engulfing newspapers he could find himself out of a job soon. Will he take a buyout if it’s offered? “Who knows?” Lee quips. “He was in broadcasting for awhile. Maybe now he’ll become a blogger.”

YES!!!!!!! Finally!!! I can't believe it. They're finally making a DC online game. As soon as this game comes out, I'm making a winged reptilian-looking character, and superman is going DOWN!! (probably)