‘The Thick of It’ fans: Please do not panic if you find Malcolm Tucker’s cell phone! 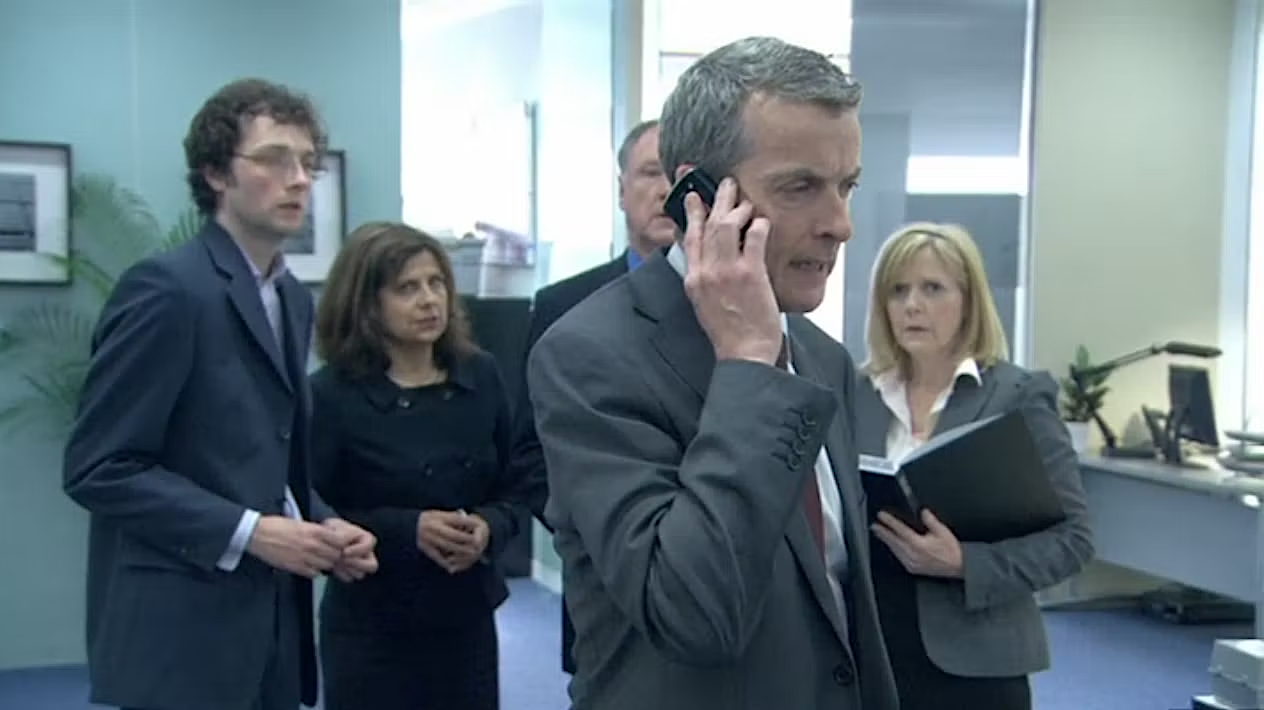 It’s been a week now since Faber & Faber, the UK publisher, released Malcolm Tucker: The Missing Phone, a comedy that takes the form of an iPhone app, and somehow the nation survives. For those who aren’t regular viewers of the BBC, a bit of explanation: Malcolm Tucker is the expletive-spouting spin doctor for No. 10 Downing Street in The Thick of It, a wicked smart comedy series that does for UK politics what The Office did for corporate bureaucracy. At the center of the £3.99 app is a delicious conceit: That you have stumbled across Malcolm’s lost mobile, which is crammed with enough incriminating emails, voicemails, text messages, and attachments to bring down the government. And you’ve got it all in the palm of your hand.

Of course, Malcolm wants his phone back very badly, and launching the app will make you the target of the government’s increasingly frantic attempts to retrieve it. Over the ensuing 72 hours, as you explore the contents of his handset, you’ll get a barrage of pottymouth communiqués from Malcolm and his associates. Expect fecund combinations of swear words (you have to be 17 to download the thing), along with perhaps the richest political satire ever to unfold on a cell phone.

For what is ostensibly a television series, The Thick of It has long had a habit of popping up at unexpected times and places. The show began with a pair of three-episode mini-seasons in 2005 (now available on DVD), then reappeared in 2007 as a pair of hour-long TV specials. In early 2009 came a movie called In the Loop, followed later in the year by a further eight episodes, each accompanied by a making-of special on BBC Red Button, the interactive channel. Last month, Faber brought out The Thick of It: The Missing DoSAC Files, a book composed of purportedly confidential documents the unfortunate press secretary has managed to leave on a train. (DoSAC is the Department of Social Affairs and Citizenship, the fictional superagency where most of the action in the series takes place.) With the app, Tucker emerges as an inadvertent one-man WikiLeaks.

The idea for a Malcolm Tucker iPhone app came up when Faber was developing the book. Dave Addey, who heads a six-person app developer in the Midlands called Agant, was working with the publisher on another title when The Thick of It came up. To determine if the lost-document idea might lend itself to phone form, Addey and one of his developers, Henry Cooke, met with the show’s creator, Glasgow-born Armando Iannucci, and its writers as they were preparing the book.

“As we talked, Henry had this idea,” Addey said when I phoned him at his office in the small town of Leamington Spa. “What if this character had lost his government-issued smartphone? The more we got into it, the more we realized it was a real opportunity for storytelling. And the writers loved the idea. For them it was a whole new medium.”

One issue they had to face was interactivity. Would users—er, finders—be able to reply to any of the flurry of voicemails and emails coming in at them? The developers played with the idea, but that meant they’d have to respond—and short of hiring someone to man the phones, they weren’t able to come up with any response that wouldn’t seem canned. “For it to work, it would have to be sufficiently realistic that it would reinforce rather than undermine the conceit,” said Addey. “So we decided the phone itself had been blocked”—reasonable enough, given the premise.

Once the app went on sale, it didn’t take long for Britain’s tweetstream to start filling up with accolades:

LudditeWebDev: I have been howling with laughter at the Malcolm Tucker iPhone app. Highly recommended!

Kimbo_Ramplin: about to surrender the blackberry. if i cave & get an effing iThing after all, it will only be for the Malcolm Tucker app.

And so on. The main complaint seems to be that £3.99 (€5.49 elsewhere in the EU, $6.99 in the US) is a bit steep for an app that stops beeping you after three days. Still, the story doesn’t exactly come to an end—the messages just taper off, “leaving open the possibility that we would be able to add more content,” as Addey put it.

And then there’s the question of canonicity. Did the bumbling Mr. Tucker actually manage to lose his secret dossier and his cell phone, each containing many of the same documents, within a few weeks? Yes and no, Addey maintained: “We have these parallel storylines. But with the phone we can do more—we can put you in the middle of it.” And will the loss(es) be referenced in future episodes of the show, which is scheduled to resume late next year? “We’re not quite sure,” said Addey. “Ultimately, that’s a decision for Armando and the writers.”