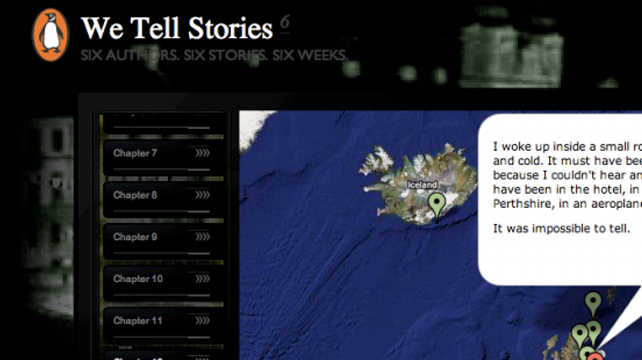 Barely a month after book publishers took a beating for their dearth of new ideas at SXSW Interactive, we’re starting to see signs of what innovation can bring. Yesterday in New York, the Wall Street Journal published an essay by Steven Johnson on the implications of the ebook, from hyperlinked texts to sales-by-the-chapter. Meanwhile, in London, Random House UK announced an even more radical departure: ebooks that include not just just text but audio, video, even games. As the company’s new “Book and Beyond” Web site puts it, “Dig deeper…with Book and Beyond, our selection of enhanced ebooks.”

The Journal piece was a fairly straightforward projection – a look at what digitization will do to books once we move beyond the gee-whiz factor of instant downloads. Thanks to the Kindle, the Amazon store, the Sony Reader, and Google Book Search, books are finally transcending the printed page. Sooner or later, that will lead to the introduction of hyperlinks. And once that happens, reading books will become a nonlinear experience, much like reading newspaper articles, magazine stories, and of course blog posts. Inevitably, the convenience of the online impulse buy—think, purchase, consume—will be accompanied by the ADD effect of the hyperlink.

Is a nonlinear book still a book? Yes, sort of. But in both a literal and a figurative sense, the book will come unbound. As the strict linearity of printed text gives way to the associative engine of hypertext, books seem destined to become not so much grand constructs as an agglomeration of chapters. Just as you can buy individual songs on iTunes for 99 cents apiece, Johnson projects, you’ll be able to buy individual chapters or short stories. In fact, that particular future is already here thanks to Harvard Business Press, which offers short excerpts for sale at the not-so-bargain price of $6.95 through its Chapters Program.

This is just the start. The index, long a useful tool for nonfiction tomes, will give way to text that’s searchable. And what readers can find, they’ll also be able to comment on. The book, in other words, is about to become not just nonlinear but participatory – and reading will go from a solitary pursuit to a form of group endeavor. This too is already here in the form of customer reviews on Amazon, but the impact will only grow. “Think of it as a permanent, global book club,” Johnson writes. Or more precisely, perhaps, as a world in which every book is annotated by every reader who takes the trouble to do so.

If the Journal piece looks at what digitization will do to text, the Random House experiment – announced on day one of the London Book Fair – aims to explore all the other things it will make possible. Just as newspaper sites routinely incorporate audio, video, interactive maps, and the like, the nine books chosen to kick off the Book and Beyond program will include all sorts of features that aren’t available on the printed page – or on the Kindle or the Sony Reader either. With file sizes that range from roughly 12 to 500 MB and types of content that go beyond anything an ebook device can play, they require a computer and Adobe software. A version for the iPhone is said to be under development.

In this iteration the book becomes not just nonlinear and participatory but multimedia and, in some cases at least, gamelike. Nothing To Lose, last year’s installment in Lee Child’s Jack Reacher series, comes with an animated video that shows Reacher reacting to a possible suicide bomber on the subway. The Book Thief, Markus Zusak’s best-selling children’s novel, includes a complete audio narration, so kids can decide when to read and when to listen. Another children’s book, Dame Jacqueline Wilson’s My Sister Jodie, is accompanied by an interactive game.

Interestingly, the people responsible for this new initiative – Fionnuala Duggan, director of Random House Group Digital, and its publisher, Jonathan Davis – both came from the UK music industry: Duggan was head of new media at EMI from 1996 to 2001, and Davis joined Random House last year after working as vice president of digital marketing at Sony BMG. In yesterday’s press announcement, Duggan said they were trying to create content that “will not only appeal to traditional book lovers, but will also reach out to a brand new readership.” In any case, it sure beats suing them.

RH UK’s “Books and Beyond” site misses the point completely, in my humble opinion. It might temporarily succeed in garnering some “early adopter” interest, as it essentially replicates the “expanded DVD” model of upselling. Yet how thoroughly UNinnovative to tag interviews and the like to an e-book, in the hope that this will justify maintaining the price point of something which actually now costs dramatically less to produce. I find it both unimaginative and slightly unethical, from a customer relationship perspective.

I sincerely hope that this fad will not devolve in to a trend.

That said, I agree wholeheartedly that, just as daily print journalism will be replaced by a more interactive form of reporting and readership, so will ebooks offer a more immersive and participatory experience.

The question should not, however, be what will the traditional publishing and news houses do to adapt to the technological, creative, and consumer shift toward ubiquitous “content anywhere” distribution, but rather will they be able to embrace this shift with enough speed, and enough strategic foresight, to avoid being left in the dust as truly innovative emerging publishers take over their role in the new marketplace?

The music industry lost out when it moved too slow, and the film industry is struggling with this challenge today. The print media industry is already seeing itself dissolve at an exponential rate, and it will be sooner rather than later that the “previously print media” equivalent of iTunes or Hulu (respectively) presents itself and is embraced by the reading public, eager to be understood and kept up with.