Report from Jeff Pulver’s Twitter conference: Humbled by our own creation 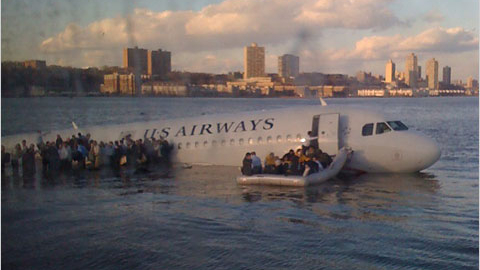 Sometimes you seize the moment, and sometimes the moment seizes you. That’s what’s happening with Twitter right now. I spent most of the morning at Jeff Pulver’s 140 Characters Conference in New York, and the message coming through was a kind of unabashed wonder at what Twitter is engendering.

The timing, of course, is remarkable. Twitter had already emerged as a critical communications tool in emergencies large and small, from the earthquake in Sichuan to the ditching of an Airbus A320 in the Hudson River, but never in an event with the global stakes of the current political upheaval in Iran. Maybe that’s why the mood at the two-day conference, which has attracted a couple of hundred people to a small theater in midtown Manhattan, is so far from the snarky tech chauvinism that’s common at such events. As Pulver put it, “I don’t take any of this lightly. I’ve learned to appreciate moments in time.”

Jack Dorsey, Twitter’s creator, started the morning by tracing the service’s origins to his high school years. Obsessed with the internal functioning of the metropolis of New York, he taught himself programming so he could map the progress of “the individual humans who make this city work”—not government officials and business leaders but taxi drivers, bike messengers, fire truck and ambulance drivers, the kind of people who literally keep the city moving. Now, 16 or 17 years later, that obsession has yielded a tool that enables individual humans to track one another’s status in almost any situation, from a conference in Manhattan to an orbiting platform in space to an unfolding political showdown in Tehran.

In the panoply of Web 2.0 services, Twitter is uniquely pure and open-ended. By creating a platform for one-to-many communication with a single, ironclad rule—140 characters max—Dorsey has achieved a significant paradox: maximum freedom through ultimate constraint. This is why, as Harvard’s Jonathan Zittrain observed today in The New York Times, “The qualities that make Twitter seem inane and half-baked are what make it so powerful.” Even more than other tools, Twitter is what we make of it—and what people are making of it in Iran is, as Dorsey said, “so inspiring.”

Tim O’Reilly, of O’Reilly Media, spoke next about his role as a publisher, which he defined the same way he defined what he tries to do with Twitter: “finding interesting people and amplifying their voices.” Building a media empire is not the point, he added—”it’s how to add value to the community you’re a part of.” Which provided a natural lead-in to Fred Wilson of Union Square Ventures, one of Twitter’s main backers, who talked about Twitter’s place in the media value chain.

Wilson didn’t give away any secrets in the ongoing debate about how/when/if Twitter is going to make money, but he did make a point: Links are the currency of the Internet, and “passed links”—that is, links that are passed from one individual to another, originally through email but now increasingly through social media like Facebook and Twitter—are more effective, and therefore more valuable, than the kind of impersonal, algorithmic links that Google provides. Wilson projects that within the next year, Facebook and Twitter combined will surpass Google in the amount of traffic they generate through links—”and that,” he added, “all turns into money at the end of the day.”

Until then, Twitter and traditional media are in more or less the same place: Neither one can say exactly how it’s going to pay for itself a year or two from now. Last week, Henry Blodget made a convincing case that the television business will soon be in as bad a state as the newspaper business. Yet as Pulver pointed out, and as the situation in Iran amply demonstrates, “it’s not about one type of media replacing the other but a fusion of the two.” What we’re witnessing now, and what the rest of the conference promises to address, is the messy process of that fusion in real time.