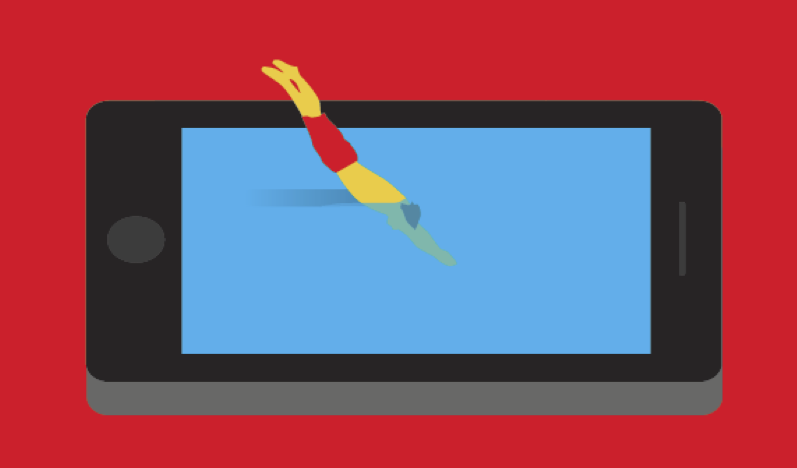 It’s a counterin­tuitive argument, which is why it appears in a slot labelled Argument, and it’s generated a lot of comment on Twitter, almost all of it positive. But Dan Mitchell, who has written about such issues for Fortune and other publica­tions, wanted to know how I could be claiming a “golden age” when statehouse news bureaus around the country are all but empty. It’s a fair question: Newspaper ad revenues have been plummeting for years, and papers have had to cut back severely. And while there are a number of answers, the simple one is this: Journalism and newspapers are not the same.

I’m not arguing that all journalism’s problems have been solved—far from it. But it’s clear that there is a market for serious online reporting, a market that’s now making the crucial transition to mobile. Just last month, for example, The New York Times reported that one of The New Yorker‘s most successful articles online was a 25,000-word report on Scientology, and added that mobile users are among the fastest-growing segments of the magazine’s read­ership. This kind of thing is crucial—because where there’s a market, there’s a way.

The “golden age” line was a quote from Marc Andreessen, the Web-browser pioneer turned venture capitalist, who mused in a blog post about the future of the news business that perhaps “we are entering into a new golden age of journalism, and we just haven’t recognized it yet.” An­dreessen was making the case for investment in news, an industry he predicted will grow over the next two decades “10X to 100X from where it is today.” This too seems counterintuitive—and yet when he wrote it we’d already seen a big influx of money into serious news ventures, from tech billionaires (Jeff Bezos, Pierre Omidyar) and VCs (Lerer Ventures, Accel Partners) alike.

It’s worth noting, by the way, that though the original meaning of “golden age” was a mythic, idyllic past, in current parlance the term usually refers to something quite different—a creative flowering, which tends to occur not during peace and prosperity but in times of ferment and creative destruction. A golden age is what happens when circumstances push people to accom­plish things they didn’t know they could do. The golden age of television came in the early ’50s, when the medium was raw and untested, show business was reeling from the Red Scare, and primitive technology meant productions had no choice but to go on the air live. Then television got regularized and highly profitable and devolved into the “vast wasteland” Newton Minow fa­mously described in 1961.

What originally inspired me to write about all this was not Andreessen’s comment but the collapse of Demand Media, the “content farm” that even Wired once conceded could be the future of the media business. People being paid next to nothing to churn out garbage content because an algorithm said it would rack up clicks: Here was a vision of journalism straight out of The Matrix—machines sucking the electrical activity out of human brains that might as well be floating in a vat. For awhile, this looked both inevitable and, in a deeply cynical way, smart. That changed pretty quickly once Google altered its own algorithm to penalize low-value, SEO-optimized sites.

Of course, it’s hard to write about stuff that’s already happened for Wired. So my editor, Mark Robinson, urged me to look ahead, at what the genuinely inevitable trend toward mobile might mean for journalism. And the signs were, as I ended up writing, remarkably positive—though not necessarily for newspapers, beyond a few special cases like The Times and The Wall Street Journal.

But if not newspapers, what? That was a big part of a discussion I attended last week at the Ford Foundation. Called “Journalism and the Web@25,” it included such people as Melissa Bell, co-founder of Vox; Jeff Jarvis, journalism professor and gadfly; and CNN’s Brian Stelter, formerly of The Times. Bottom line, as expressed most forcefully by Jarvis: Journalism needs to stop thinking of itself as a product and start thinking of itself as a service.

Jarvis has said this before, more than once. It bears repeating because when you print something on paper and start selling it to people, it’s very hard to think of that as a service. It’s even harder when you sell the exact same thing to tens or hundreds of thousands of readers and keep doing it day after day for decades. It’s efficient, sure—but at the price of turning information into a product and individuals into a mass. Now that information can be had in other ways—personalized, geographically relevant, through a variety of devices, and as a conversation rather than simply a report—the people formerly known as the masses can’t really be expected to stick around.

Last fall I reviewed a very smart book called Writing on the Wall by Tom Standage of The Economist. It provides some very useful perspective—that thing journalists are supposed to provide—to journalism itself. As Standage explains, mass-circulation newspapers (and journalism along with them) are a modern invention dating back no further than the Industrial Revolution. Before then, newspapers were essentially blogs in print form—full of material lifted from other sources, distributed mainly through social networks, and serving more as a conduit for public debate than as a comprehensive update on current developments. Then came high-speed printing presses and ambitious young entrepreneurs—people like Benjamin Day, whose New York Sun sold for a penny at a time when most papers cost five or six cents. To make this work, Day needed advertisers, and to get advertisers he needed a lot of readers, and to get a lot of readers he needed people to write stories they’d want to read—like the Sun’s infamous 1835 series about the supposed discovery of civilizations on the moon. And so modern journalism was born.

The penny press is long gone, and many of its more respectable successors seem headed in the same direction. What will replace them became the subject of several conversations on Twitter yesterday, one of them sparked by Andreessen. Ideas abound. Maybe an Uber-like “demand and supply” system? “Yep,” Andreessen replied. “I think so. Crowdfunding on the fly, in a sense.” Check out Beacon, which does something very close to that, advised Nicholas Moryl of Khosla Ventures and Justin Kan of Y Combinator. Sure, it’s a long way from late 20th-century corporate newspapering—but we have to start somewhere, and it certainly compares favorably with The Sun.

Interesting post, as ever, however I want to clarify one detail.

SEO, when overdone is cynical, obvious and unpleasant reading. It has been clumsily used to game the system. I say this as as someone who (ahem) has worked within the SEO industry and I am fully aware of the stigma of this industry. Unfortunately much of it is deserved. SEO has done terrible things to the internet and so-called "SEOs", those strangers who comment spam your blog with dubious claims, don't do much to help matters.

However, it is important to remember that the basic principles of technically setting up your site and understanding basic SEO principles remain very important for publishers. Making sure the search engines can crawl and therefore potentially index your content for example, is important as search engine algorithms value freshness. I just wanted to point out that good, non-flashy implementation of SEO is still useful. Just not as much as it once was.

That is all, lecture over!

Thanks, Sarah. I totally agree. There's nothing inherently wrong with SEO. There is something wrong when it's used to game the system, tricking people into clicking on links that aren't going to give them what they want. Google's Panda algorithm—and in particular the updates that went into effect in 2013—was specifically intended to penalize low-value content farms like Demand Media. The good news is, it worked.

Oh, thank you! Representing SEO is a bit like having an embarrassing uncle at a wedding: fun for everyone else, character building for me!

Newspapers are more than just a service; they are an institution that provides research assistance, knowledge gained from prior experience, a sense of organization, and most of all, editorial support. These are critical things to journalism. Most of the "post newspaper" models I've heard of seem to ignore these things. Journalists who are already scraping by can't be be reasonably expected to buy/rent/provide all these things, can they? The bullpen and news desks aren't just anachronisms, but means by which journalists got organized and focused. This is not to say you need to recreate the newspaper, but you do have to think about how those support systems are going to be built into whatever replaces it.

Thanks, Arthur. An excellent point.