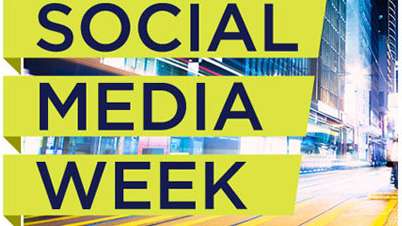 “How can we regain control, establish balance, and preserve what makes us human? This is what we will be exploring during this year’s Social Media Week.”

So ends a series of recent posts by Social Media Week founder Toby Daniels on The Next Web. Back in November, Toby asked, “How much power do you have over your tech obses­sion?” (Spoiler alert: Not much, as evidenced by that couple at the next table—we’ve all seen them—who spend the entire evening gazing into their smartphones.) A couple of weeks ago he asked, “what would happen if we lived with more intention—tried to be more human in this age of digital technology?” And in one of the videos embedded above he explains that this winter’s Social Media Week—which begins on Monday in New York and seven other cities around the globe—was designed to examine “the idea that there are two sides to technology: the positive impact of how technology is shaping our lives, but also a negative aspect as well. What we wanted to do really during Social Media Week was to explore both sides of this argument.”

It’s a slow journey, but clearly we’ve moved a long way from the days of the digerati-Luddite standoff. In fact, the re­markable thing about this impact-of-tech­nology argument is that it’s becoming less a shouting match and more a dis­cussion. It’s not too hard to see why. First, digital tech­nology has so permeated human life today that nearly everyone is im­plicated, regardless of how tech-phobic they might be. But at the same time, those in the vanguard have been at it long enough to see that starry-eyed visions of technotopia are actually kind of silly—and that assertions of techno-supremacy are even worse. Yes, there are still hordes of people who ignore the world around them in favor of a glowing screen—but increasingly we all see it as a problem. Cyber-addiction isn’t just something that happens in South Korea any more. Like it or not, we’re starting to reach a new and hopefully healthier stage in our relationship with technology.

Which brings us back to Social Media Week. One of the more intriguing things about Social Media Week—and South by Southwest and Techonomy and the myriad other conferences at which people gather in a physical location to discuss digital stuff—is how much physical matters. As John Hagel and John Seely Brown observed the other day on Techonomy, “physical meetups still enable more compelling spontaneous interactions, establish deeper trusted relationships, and let us share tacit knowledge in ways no other connections can.”

Social Media Week New York begins Monday evening and continues through next Friday. There’s a full schedule, with highlights like Eli Pariser on “Upworthy’s Real Mission,” Cindy Gallop on “Changing the World Through Sex,” and Scott Heiferman, co-founder of Meetup, which he started not long after 9/11 after seeing how strangers spontaneously come together for emotional support. Campus passes, which offer access to most events, are $249 for the week. But following this link gives you a 30 per cent discount—until tomorrow (Friday) at midnight, when online sales end.

Social media has its place in Internet marketing – no question about it – but it can be difficult and challenging to implement at times, especially in B2B environments. It’s much easier to use social media when conducting B2C campaigns, as this has been clearly shown time and time again. Selling and promoting vintage jeans on social media for B2C is much easier than selling accounting services for B2B on social media. Again, just remember that social media “can” be effective, it just depends on the environment one is in. Not every marketing tool or platform is designed for every company.