Way-way-off-Broadway: How the immersive theater of ‘Then She Fell’ resonates with the digital world 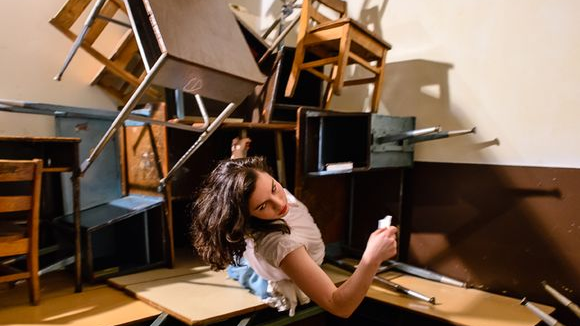 Okay, here’s an admission: I’ve never been able to take Broadway musicals seriously. In fact, I’ve barely been able to take them at all. I did watch the Tonys last night with an actress friend who’s in from LA, and I have to admit there were some transcendent moments—Cyndi Lauper performing her ’80s hit “True Colors”; almost any time Neil Patrick Harris was onstage; Kinky Boots sweeping the awards and capping it off with best musical. (Drag queens, I’ve found, can salvage just about anything.) But the good news from my perspective is that conventional, proscenium-arch theater, musical and otherwise, has been getting serious competition recently from the immersive variety—from productions that break down the fourth wall, and with it the barrier between audience and performance.

One of the standouts is Then She Fell, an intimately scaled, highly idiosyncratic look at the Lewis Carroll-Alice Liddell relationship. Staged (so to speak) in a grim, featureless structure in Williamsburg that was built a century ago as a parochial school, the performances are limited to an audience of 15—small enough that everyone gets an individualized experience. The three-story building, cramped and institutional, has been re-imagined as Kingsland Ward, a dubious facility that’s home to all manner of feverish behavior involving a Mad Hatter, a White Queen, a Red Queen, two Alices, and Carroll himself. As strange and dreamlike as the Alice books themselves, Then She Fell invites you to explore the fantastical world that Carroll created—and with it, the mystery of the Oxford mathematician and the little girl he liked to take rowing, until for unexplained reasons her mother cut off the relationship one day in 1863.

One of the many fascinating things about Then She Fell is the way it resonates with the digital world we live in. An entirely no-tech production, it nonetheless manages to feel utterly con­temporary in a time of video games and online media. I wanted to know how this worked, so I emailed some questions to Tom Pearson, co-founder of Third Rail Projects, the New York theater company that produces it. Here’s what he had to say:

First off, why Alice?

We decided to work with the two Alice stories and the life of Lewis Carroll for all its rich psychological terrain as well as its amazing structural components — but also because there is already a cultural cachet to these works which provides a really palpable entry point for audiences. Most folks are familiar with the stories to some extent, whether it’s certain images or story lines that they remember from the books, film versions, or general cultural saturation. It gives us an opportunity to really take these images and themes into more abstract territory. This is a very good thing for immersive storytelling, where the narrative is inherently fragmented. Giving audiences something familiar allows them to enter the world with some sort of grounding, and then also allows us to quickly subvert those expectations . . . much like the Alice stories themselves.

What makes an experience immersive? Clearly it doesn’t have to depend on technology.

It’s immersive because when you enter it, the world engulfs you and you no longer see its edges. You are implicated as opposed to removed. There is no fourth wall at all in our experience, though sometimes you view scenes through carefully composed apertures, which gives you the feeling of being inside of a film. You are at times completely surrounded or directly engaged with the performers, and also in our case, engaged with the tastes, smells and textures that we provide. Immersive theater can exist anywhere on the spectrum in terms of the way it deals with audience participation,  audience agency, or how the fourth wall is dealt with. In Then She Fell, we chose to meticulously guide our audiences through the world, so each performance/audience experience is carefully crafted for each individual.

Forbes called this “theater for the video game generation.” Is that something you set out to do?

We certainly approached the creation of the work with the user experience in mind . . . ideas about agency, leveling up, game structure. Video game logic certainly played a part in informing certain structural choices.

There’ve been a number of successful productions recently that seek to involve the audience more or less directly—Sleep No More, Secret Cinema in London (and soon in New York), Then She Fell. . . . Why do you think that is?

I think the success that immersive theater is currently enjoying has a lot to do with the time we live in and the cultural systems at play. I see experience-based work as both a response or remedy for our digital lives, but also deeply indebted to and enabled by them. We have so much virtual experience in our daily routines, that I believe larger audiences are not content to sit passively for live events, but rather want to participate. We seek out the tactile, the personal, the one-on-one engagement. But also, I think we are able to navigate these worlds because we understand the role play, the labyrinthine fantasy logic of them due, in part, to our digital experiences.

What motivated you to start making productions like this? Were you influenced by video games, or alternate reality games, or other sorts of participatory entertainment experiences?

We originally started making site-specific works as a way to connect with a wider public, engage with real-world architecture, and put our art into the public in a more direct way. We wanted to get our work out of the art houses and theaters, to figure out new methods for capturing people’s attention, discover new structures for dance and theater, and finding ways to refocus and re-contextualize the kind of art we were making. Immersive theater became the next logical step, allowing us to utilize the robust movement, structure and storytelling tools we discovered working on-site alongside the tools that a closed-world theatrical environment allows in terms of focus and intimacy.

Are there people who come who just don’t get it?

I think a lot of people aren’t sure what to expect, but most leave with a sense of real satisfaction even so. It’s hard not to get it. It surrounds you and gets into all your senses.  Even if you don’t understand one bit of the narrative, you still walk away as if from a dream. It permeates you in some way and you are affected by it even if you can’t quantify it.  I think that’s what people respond to the most, and many people contact us to tell us their experiences. They feel haunted by the work, and it opens up so many questions for them, that they continue to ponder it long after they leave. I love that.

What can go wrong in a production like this? What do you have to guard against?

Because it’s so intimate, everything is always new (both a blessing and a curse). Every audience member has the potential to respond in a new way, and each scene can be a real collaboration to some extent. That’s exciting, but it also means you have to train differently and be prepared for a wide palette of responses. It also means the structure you are working in must be very clearly defined and solid so your performance is supported. Structure is everything.

Do you think immersive, interactive theater will ever take the place of conventional, proscenium-arch theater? Or is it essentially a counterpoint?

I think it’s a counterpoint.  They are both mutually informative, though vastly different. I’ve always found there’s a real exchange between the two and what you can learn from both. Site-specific and immersive theater are not new. They are as old as any other form of theater, but what we are seeing now is more of a saturation of these forms. I think it will continue to grow and evolve as long as artists keep adding new ideas to the conversation. I think a lot of the surge is also audience driven. People are really hungry for this type of theater now. It’s waking people up.

I was there, don't remember much of the dialogue but one certain thing is that I really believe was like a living experience, I was living every moment in each room, of course the food and drinks were different but of a good taste, oh boy, that girl Alice, a little bit confused but she knew what she wanted, Lewis Carroll?, well, when you see my name you can interpret my interest in that character, I will love to go to the show again and I will pay better attention as to fully understand the performance of the entire cast. The beginning was easy, the curiosity was killing me on what to do with the information that I was about to see inside ...... Thanks for the beautiful and inspired night, love it.!!!!