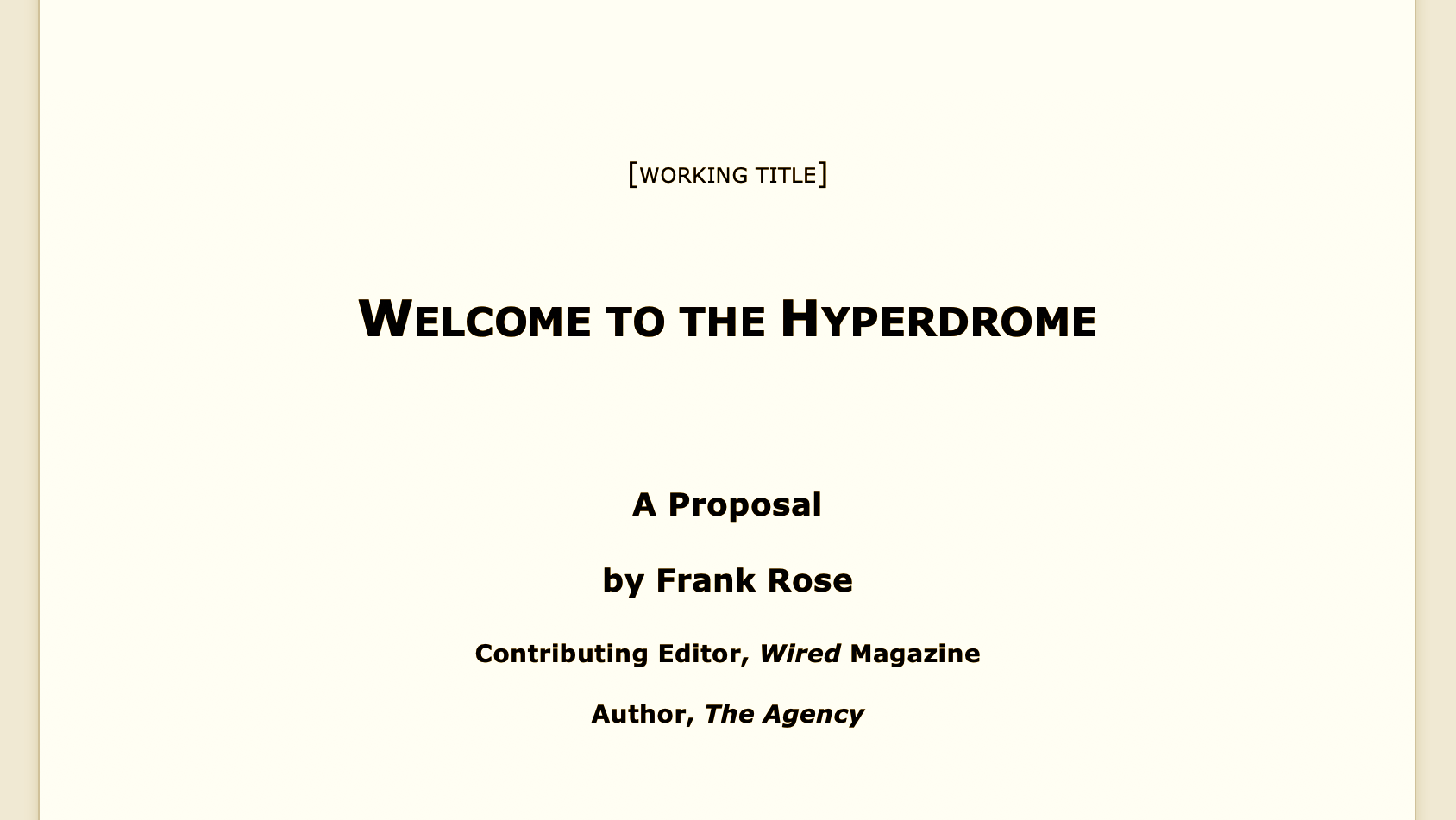 This is the initial post on the Deep Media blog.

After nearly a decade of writing full-time for Wired, I’ve started a book. It’s about how narrative is changing in the Internet age, and how that affects entertainment, marketing, our brains, and myriad other stuff. It’s called Welcome to the Hyperdrome, and it will be published by W.W. Norton.

The idea is to document—and where possible to participate in—the attempt to forge a new type of storytelling that’s native to the Internet. After centuries of linear storytelling, the Internet is encouraging the emergence of a radically new style of narrative—one that’s told through many media at once in a nonlinear fashion. Such narratives encourage you not merely to watch but to participate, and in the process they become something resembling a game. This is “deep media”: stories that are not just entertaining but immersive, that take you deeper than an hour-long TV drama or a two-hour movie or a 30-second spot will permit.

Today this new narrative is still nascent. But we see signs of its emergence all around us: in television shows like Battlestar Galactica, which spins a highly nuanced tale not just on TV but through online video, multiple blogs, and a “social gaming experience” that invites you to choose sides between human and cylon. In movies like The Dark Knight, which drew millions of people into an elaborate game that gave them a role, however fleeting, in the latest Batman film. In social media, from YouTube to MySpace to Twitter, which encourage people to document their lives online in a fluid, collaborative, and very public autobiography. Everywhere we look, stories are breaking the bounds imposed by print and film and video. A TV show is not just a TV show. A movie is not just to be watched onscreen. A diary is splayed out for the world to see.

The idea for this began more than a year ago, in January 2008, when I published an article in Wired about Nine Inch Nails’ Year Zero—not the album but the alternate reality game, which Trent Reznor had developed the year before with a little company called 42 Entertainment. Together, the game and the album told the story of a future America ravaged by climate change, racked by terrorism, and ruled by a Christian military dictatorship. But where the album told this story in song, the game—a cascading sequence of riddles and puzzles that played out over several months, both online and in the real world—actually sought to give people a taste of what life in a massively dysfunctional theocratic police state might be like. Eventually I began to see such games as the leading edge of a much larger trend: a radical transformation in storytelling that’s sweeping not just entertainment but many other aspects of our lives, from marketing to commerce to education to the face we present to the public.

This is not the first time the way we tell stories has changed. Every major advance in communications has given birth to a new type of narrative: the printing press and and moveable type led to the emergence of the novel in the 17th and 18th centuries; the motion picture camera, after a long period of experimentation, gave rise to movies; television created the sitcom. The Internet, like all of these technologies in their earliest days, has until recently served mainly as a vehicle for retransmitting familiar formats. For all the talk of “new media,” it has served as little more than a new delivery mechanism for old media, from newspapers to music to TV shows. As disruptive as it’s been to media businesses, its impact on media itself is only beginning.

Humans formulate stories to make sense of their world. Every other advance in communications has led to a shift in our perception of that world. By presenting the truth of individual experience (as the critic Ian Watt put it), the novel gave people for the first time a window onto one another’s lives. Hollywood provided a picture window, and substituted movie stars for ordinary people. Television, as Clay Shirky has pointed out, did society the favor of soaking up all the free time created by vacuum cleaners, automatic dishwashers, and post-World War II prosperity. But that was a long time ago. Now, 20 years into the development of the Web, the sitcom is practically dead (the best efforts of Tina Fey notwithstanding), and the concept of leisure time has all but evaporated in a constant cascade of information. What remains to be seen is precisely what will come next.

Decades ago, computer scientists introduced the idea of hypertext, which uses links to create a network of information sources. Now we are moving into a hyperdrome, into an all-encompassing info-maze where everyone and everything are connected. Boundaries that once seemed clear—between storyteller and audience, content and marketing, illusion and reality—are starting to blur. This blog will help document the transition. Please join the discussion.