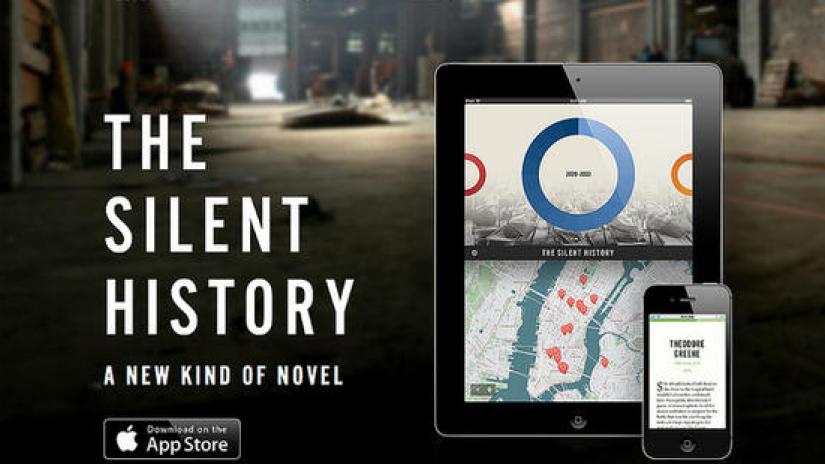 It’s been nearly a year now since a couple of McSweeney’s alums released The Silent History, a story in app form about a near-future epidemic of EPR—emergent phasic resistance, “a congenital disorder characterized by the inability to generate or comprehend language of any kind.” It was all very meta—a story about the loss of language, which of course is the tool we use to tell stories, that was itself a re-tooling of the way we tell stories. It was also beautifully written and published and inventively structured—an intriguing exploration of new possibilities for narrative. But now that it’s been out for awhile, what does it tell us about the future of storytelling?
Yesterday I had a chance to talk this over with Eli Horowitz, the ex-publisher of McSweeney’s, who created The Silent His­tory with McSweeney’s former digital me­dia director, Russell Quinn, and writ­ers Kevin Moffett and Matthew Der­by. Along with nov­elist Paul La Farge and An­drea Phil­lips, author of A Cre­a­tor’s Guide to Transmedia Sto­ry­tell­ing, I took part in a Goo­gle+ Hang­out with Horo­witz organ­ized by the Future of Story­Telling folks. We talked about par­ticipation, serial­iza­tion, and im­mer­sive­ness and came away with three key lessons about story­­telling in the digital age.

Although it’s a novel, not a TV show like The Walking Dead or Breaking Bad, The Silent History resembles them in that it was presented in serial form—one chap­ter per weekday for roughly six months. Thanks to Net­flix, which facili­tated binge view­ing of network shows and then cement­ed the practice with its own release of House of Cards, seriali­zation seems a bit old hat right now. But I agree with Horowitz’s take on binge viewing: “You lose anticipation, you lose cliffhangers, you feel kind of gross”—in short, it’s a lot like binge eating.
But maybe there’s a middle way? “What I’m interested in,” he continued, “and what feels funda­mentally new about these devices, is the idea of interactive seriali­zation or dynamic serialization, where the pacing adjusts to the individual users—not by giving it entirely up to them, but by somehow understanding the right pace for them. That’s something I’m starting to experiment with.”

McSweeney’s is in the business of producing artifacts—beautifully designed books and mag­azines, some of them on a quarterly publication schedule. One of the factors that motivated Horo­witz to create The Silent History was his frustration with e-books, most of which deny you the physicality of printed books without realizing the interactive potential of digital. Thanks to its innovative structure, The Silent History manages to offer both physicality and interactivity.
The story is told through 120 “testimonials”—short accounts from parents, doctors, teachers, and a variety of other participants that together form a sort of oral history of the silent phenomenon. But it also features a number of “field reports”—site-specific accounts that can only be read when you are physically located at the place where they happened. These are enabled by GPS technology, but the technology itself is not the point. “It’s the experience of standing there reading the thing,” Horowitz said, “and then piecing together—seeing the scratch in the pavement, seeing the broken window, seeing the strangely ornate banister and piecing that together in your head, kind of like an investigator or an archaeologist.” So while it was enabled by digital technology, “it was a very physical, low-fi aspect of the experience.”

3. Geolocation and immersion can work at cross purposes.

The field reports, he explained, began as a purely functional exercise. Since he was telling a story about a global phenomenon, he didn’t want to have it set only in San Francisco, where he lives—so he hit on the idea of having other people write parts of the story and set it where they were. Only after the fact, he added, did he realize that, with approximately 100 field reporters on six continents, he had created “almost like a social network of fiction.” At the same time, he wanted to recreate in a way the experience he’d had with a friend of driving up to northern California’s redwood country to explore first-hand the world of Denis Johnson’s Gothic novel, Already Dead. Having spent several hours in sub-freezing weather to take the Stieg Larsson Millennium Tour in Stockholm, I knew the feeling.
One of the smart things about the field reports is that they aren’t essential to the narrative—they add depth to the story if you have the ability and the inclination to access them, but you don’t need to do so to understand the story. “I wanted to have many different levels of engagement,” he said, to match people’s different levels of interest. “Most things that I look at I say, well, that seems neat—I just don’t wanna do it, ’cause I’m a lazy person, you know? Understanding your lazy audience is really the same as understanding yourself—I think that’s a fundamental part of these projects.”

What he found, however, is that not everybody considers the field reports so optional. Roughly 30 per cent felt “kind of sad that they can’t read everything, and actually like five per cent feel righteous indignation that they can’t.” For these “completists,” the geolocation aspect of the story worked against their desire to immerse themselves in it.

“But it’s fine,” he went on. “To me, that aspect of it—I mean, I wouldn’t want to say this out loud in a public setting or anything, but that’s almost the art of it. It’s sort of about place in a digital world. If you’re not in Vancouver you’re not in Vancouver, so I can’t simulate you being in Vancouver by giving you access. That’s why we avoided ever using words like ‘unlock’ or anything. You were there. You can’t read it ’cause you’re not there, ’cause it is there, and you’re not.”