‘Embracing Analog’ at SXSW: What the growing fascination with the physical means for marketers* 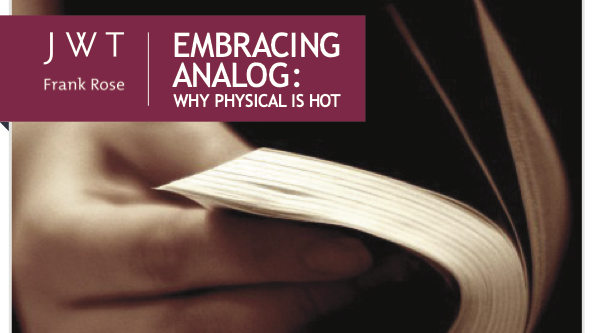 “Embracing Analog: Why Physical Is Hot” can be downloaded here.

For this year’s SXSW, I worked with the ad agency JWT to devise a survey that would get at what seems an increasingly key question: How do we feel about items in the physical world—books, newspapers, magazines, records, mail—that are rapidly being made obsolete by their digital counterparts? A few years ago, the response in most of the wired world would probably have been, “good riddance.” But in talking with people I knew in their 20s and 30s, it was becoming apparent that this wasn’t their reaction at all. More and more they seemed to echo Scott Lindenbaum, the 30-year-old cofounder of SPUN, who said to me one day last year as we were talking about music, “Certain objects have memories. In 20 years, I want a token that I enjoyed this album in 2012. I’d hate to have to tell my son, ‘Here’s my hard drive.’”

Is digital supremacy really going into abeyance? Without further evidence, it was hard to say if this attitude extended beyond the reach of the L train. But JWT Intelligence, the agency’s research and trendspotting unit, had just listed “Objectifying Objects”—the idea that as objects dematerialize, “people are fetishizing the physical and the tactile”—among its key trends for the year. And the surprise popularity of out-of-bounds theatrical experiences like Punchdrunk’s Sleep No More certainly suggests that immersive entertainment does not have to be digital to be exciting. So I met with the director of JWT Intelligence, Ann Mack, and we decided to collaborate on a survey that would explore the issue further. For the next few months we worked with other people at the agency—in particular Marian Berelowitz, from Ann’s group, and Mark Truss, JWT’s director of brand intelligence—to decide what to ask and how best to proceed.

The poll was conducted in early February using a statistically representative sample of 800 adults (18+) in the US and 400 in the UK. Earlier this week, JWT released the results in a trend report. Meanwhile, Ann and I presented the results from the US poll at SXSW with Paul Woolmington, founding partner of Naked Communications Americas. Here are a few high­lights from that session.

First we asked people about their behavior: What sorts of things do they do online? What do they tend to do offline? We found a clear pattern. Almost everybody we surveyed uses the Internet to research products they’re thinking about buying. Large majorities use it for similarly utilitarian purposes, like paying bills and shopping for music and books, as well as for playing games and sharing photos. But when it comes to media consumption—reading books and magazines, listening to the radio, watching TV—the numbers were much lower.

Next we segmented our respondents into four categories according to their digital behavior—”firmly in the past,” “dabbling with digital,” “on their way to digital,” and “hard-core digital”—and correlated those with standard demographic variables such as age cohort, gender, education, and income. We found that digital behavior corresponded directly not just with age but with income and education. The younger, better-educated, and more affluent you were, the more likely you were to do things digitally. The least digital of all turned out to be a Boomer male with no college degree who earns less than $40,000 per year. But even among those least digitally inclined, going online to research products was an almost universal behavior. Clearly this is the gateway drug of the Internet.

Predictably, Millennials (18-34) proved more digitally inclined than any other age group—but even there, only 7 per cent were what we’d call hard-core. Half of Boomers (49-68) and nearly two-thirds of Silents (68+) were still stuck in analog. It made sense, then, that Millennials and Gen-Xers were more enthusiastic about digital music, photos, and books than older groups. What they liked about digital was mostly its convenience—easier to shop for, easier to store.

Yet the younger groups—Millennials in particular—also expressed a liking for physical items—books, records, cards and letters. When we asked people if they agreed with the idea that a card or a letter sent through the mail makes them feel more connected to someone than email or text messages, nearly 8 in 10 said yes—and the difference between age cohorts was negligible. Surprisingly, Millennials were actually somewhat more enthusiastic about printed books and magazines than older groups. And though they weren’t big on landline phones, Millennials were significantly more attached to the idea of printed books and magazines, actual mail, and even mail-order catalogs than Gen-Xers.

The differences were even more dramatic when we turned to questions involving the emotional attachment people often feel toward physical objects. Two-thirds of Millennials—more than any other group—said they regard nicks and scratches as a sign of personality. Millennials were also far more likely than older groups to regard now-obsolete products as collectibles. The older you are, it seems, the more likely you are to regard old record players and the like as junk to be thrown away.

What does it all mean? Taken together, our results suggest that predictions of an all-digital future were somewhere between premature and naive. This meshes with the general mood at SXSW: As The Wall Street Journal‘s Accelerator blog noted, “This year it was all about the real world.” MakerBot and its new Digitizer Desktop 3D Scanner were a big hit. MakerBot has already taken us from the Metaverse to the Thingiverse. With the new Digitizer, CEO Bre Pettis observed in his opening remarks last Friday, it’s doing the reverse as well—bringing physical objects into the digital world.

What we found was that people value digital for its functionality—but they value physical objects as well, for reasons that have little to do with practical considerations. From a marketing standpoint, this means that purveyors of digital offerings and physical goods alike need to hone their thinking. In the end, we came up with six ways marketers can leverage these findings to address people’s wants and expectations:

1. Play up everything that’s unique about physical goods—

their tactile qualities, their imperfections, their ability to endure over time.

2. Avoid the emotional void in digital.

Since digital offerings typically lack the emotional appeal of actual stuff, focus on ways to make them more seem warmer and more personable. As Paul noted in a Q&A we did with JWT Intelligence, “We’re looking for more meaningful emotional experiences and connections. We’re seeking to rebalance our IQ and EQ states.”

This not only satisfies the need for tangibility; it also increases the perception of value, since digitization raises questions about the fair price of intellectual property. If you’re not paying for factories and distribution costs, then what are you paying for exactly?

4. Revive meaningful traditions that are fading with the move to digital.

Brands need to find ways to position themselves as counterpoints to the proliferation of digital offerings without taking an anti-tech stance.

5. Make it easy for people to repurpose old goods.

The rise of the hacker ethic and remix culture is now being felt in the physical world. Three-quarters of the Millennials we polled expressed an interest in combining new technology with vintage parts. And when we looked at the hard-core digital crowd, that number topped 90 per cent. Clearly there’s an advantage to brands in helping people who want to make this happen.

6. Bridge the digital and the physical.

There’s a lot to be said for enabling people to use technology to create real-world objects, like postcards printed from photos on your smartphone and sent through the mail. As MakerBot has demonstrated, the digital/physical divide is no longer absolute. Soon it may not even exist.

Very interesting...and no surprise. Digital is essentially logical, and makes a bad fist of describing the emotional nature of an idea, brand, proposition etc. Human beings haven't evolved to be logic-only animals in a single generation and our relationship with physical objects is an essential part of the human experience...we need to know how stuff feels. Print is feeling the heat more than any sector right now, and magazines more than anything else in print media since their experience is so closely imitated by iPads etc. I'm putting together a new publication–CONTAINER–that celebrates and explores the nature of physical objects. Like a magazine, but not at all like a magazine.

Physical media — books, LPs and the like — are scarce objects. No matter how many are made, the number is finite, the individual objects are unique, and are subject to wear, damage and loss over time. The ones that survive retain value according to their condition.

Attaching infinite objects to scarce objects can make those scarce objects more valuable. Some examples:
1. Unlimited streaming of the movie Clueless (infinite) has helped cement Jane Austen's position as a literary icon for another generation. This in turn elevates the value a certified first-edition copy of Emma (scarce).
2. Reports show digital downloads of Van Halen's A Different Kind of Truth (infinite) are not selling well, but music industry veteran Bob Lefsetz offers this view: "Based on [fan] reaction, the band will be able to tour for years." (Concert tickets: scarce.)
3. A high-resolution digital transfer of a rare LP, taken on the owner's own equipment calibrated to his exact specifications, allows the LP's content to be shared, studied and enjoyed without inflicting further damage. The scarce object becomes more significant by being both widely accessible (infinite) and perfectly preserved.

Precisely. I think a great deal of confusion could be avoided if more people understood the difference between digital media and physical media. Infinite objects v. scarce objects is a good way to put it.