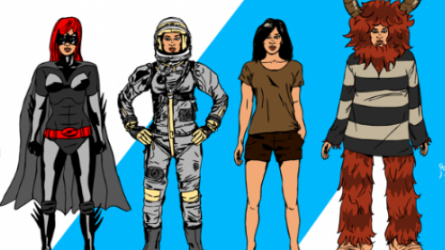 If last Wednesday’s program at Future of Television East offered a taste of the deep media future, this past weekend’s Futures of Entertainment 4 at MIT was a full-on banquet. Convened as in the past by Henry Jenkins, who recently left MIT for a deservedly big-deal professorship at USC’s Annenberg School, the two-day conference was an immersive discussion of the prospect that entertainment will no longer be restricted to a single medium—that stories will increasingly be told in multiple formats and engage the audience in a more or less active fashion. In other words, precisely what my book is about. The proceedings inspired a flood of thoughts, some of which I’ve actually managed to jot down.

The Fallacy of Newness

In his opening keynote, Henry sought to put the subject in historical context. “The focus on newness may mislead us,” he said. This bears repeating. People on all sides of the debate about where media is headed seem to assume that what’s now is the way it always was, and what’s new is some kind of radical departure. This is a crippling form of myopia.

Henry cited multiple examples of transmedia storytelling that long predate the Internet—from Felix the Cat, the early cartoon figure who still adorns a 1920s car dealership near the USC campus, to The Wonderful Wizard of Oz, which was told not just in a book and the Judy Garland movie but in many other books, a stage musical that included a product placement for Budweiser beer, and a lecture series in which L. Frank Baum, the author, gave a slide-show tour of Oz. Oh, and don’t forget the Bible, which for centuries was taught through sermons and stained-glass windows.

Somewhere during his talk, Henry laid out several characteristics of this form of storytelling. I was particularly taken with the first: “drillability,” which he described as a kind of “forensic fandom,” a “vertical descent into the complexities” of a story. This very neatly describes what I mean by “deep media”: narratives structured in such a way that fans can explore them as deeply as they want to go. (For the record, the main distinction between “deep media” and “transmedia,” the term Henry popularized in his book Convergence Culture, is emphasis: “transmedia” puts the focus on the breadth of experience the Internet affords, “deep media” on its potential for depth. Or, as I put it on Twitter when the question came up last spring at SXSW, “two blind men, one elephant.”) Like Henry, I think drillability is a key element in the future of entertainment—and for that matter, the future of advertising as well. But this too is not new—just newly enabled.

Yes, the Internet is changing who we are. The brain is the most malleable organ of the body, and its wiring has already been altered by countless new technologies, from the automobile to film to television. But our essential nature is as impervious to technology as it is to good intentions. Nobody would get behind the wheel or sit in front of the tube if they didn’t like it, or at least like what it enables them to do (get somewhere, veg out, whatever). Likewise, nobody would immerse themselves in multiple iterations of Lost or Battlestar Galactica if doing so didn’t fulfill some sort of elemental desire.

Mass media, and the corporate structure that supports it, limits our ability to do that—but mass media has only been around for a hundred years or so. There’s nothing new about telling stories in multiple ways and delving into these stories in as much detail as possible; all that’s new is that the Internet makes it so easy. The more people understand that, the easier it will be to let go of what we’ve known and embrace other (not necessarily new) possibilities.

The Reality of Illusion

The conference featured two discussions labeled “Producing Transmedia Experiences”—one focused on stories, the other on games. The stories panel followed Henry’s introduction. It featured Victoria Jaye, who’s in charge of “multiplatform storytelling” at the BBC, and two people who’ve produced landmark participatory narratives—Brian Clark, who created a memorable alternate reality game for Audi called The Art of the Heist, and Mike Monello, a coproducer of The Blair Witch Project, the micro-budget pseudo-documentary that for a brief period in 1999 made everyone in Hollywood feel really, really out of touch—until the Internet bust happened and they got to feel smug again.

One bit of intelligence we picked up is that EastEnders, the BBC’s perennial nighttime soap, will soon sprout parallel Webisodes written by 17-to-22-year-olds from the point of view of four students who’ve moved into an empty flat on Albert Square. But the most intriguing part of the discussion, from my perspective, was Monello’s take on the recent dustup involving True Blood and Gawker.

Thanks to Blair Witch and now to the True Blood campaign, which Campfire, his digital agency, orchestrated on behalf of HBO, Monello has become identified with stories that blur the line between fiction and reality—another characteristic of Internet-enabled narratives. Blair Witch was a horror movie purportedly made from footage shot by three amateur filmmakers who disappeared while investigating a local legend. (Years later, the same conceit had people thinking Lonelygirl15 was made by a teenage videoblogger.) The True Blood campaign was a marketing effort that for a short while had people believing that Gawker Media was launching a vampire blog. Even for Gawker, this sounds a tad far-fetched. Nonetheless, it was duly reported as fact by the Silicon Alley Reporter and other outlets, prompting much anguished comment about the need to keep fact from fiction. “I always thought that was a funny argument,” Monello said during the discussion. “We’re talking about vampires here—of course it’s fiction!”

Oh, right. Well, everybody loves a good hoax, except maybe the victim. But Monello isn’t the only one blurring the line here. What about all those fans who send email to Web video characters? In 2007, the producers of Prom Queen were nonplussed when viewers started sending email to Nikki and Lauren and their friends. Then it dawned on the Web serial’s creators that if they answered those emails they’d be able to, as they say in the industry, really engage the audience.

In fact, the line between fact and fiction gets blurred whenever people want to immerse themselves in a good yarn—and there’s nothing new about that either. In 1841, readers of The Old Curiosity Shop, which Dickens was publishing in monthly installments, got so enmeshed in his tale of woe that they beseeched him not to kill off the saintly Little Nell and sobbed inconsolably when he did. Internet or no Internet, the willing suspension of disbelief has a tendency to go demonstrably haywire. Is this because we feel compelled to close the feedback loop, even if we know there’s only a fictional character on the other end? Or are we just pathetically lonely creatures desperate for any kind of human connection, even if it’s not actually human or even real? This may bear further investigation.

The Crisis of Authorship

The second panel on “Producing Transmedia Experiences” threw me into the mix with Mia Consalvo of MIT; Ken Eklund, creator of the alternate reality game World Without Oil; Louisa Stein of San Diego State; and Jordan Weisman, founder of 42 Entertainment and more recently of Smith & Tinker. The focus here was on participation and play, and much of the discussion, moderated by Ivan Askwith of Big Spaceship, dwelled on a question that brings up: the relationship between storyteller and audience. When Ken began by describing WWO as “a crowdsourced narrative” and said he hoped to be the Jimmy Wales of game narratives, I started thinking the whole idea of authorship is in trouble.

It wasn’t the first time I’ve felt that way. In a recent PSFK post titled “Is the Writing on the Wall for Blogs?”, Piers Fawkes wondered if he shouldn’t just crowdsource his blog and “let the readers do the writing.” But what if they don’t all want to do the writing—I mean, isn’t that why they’re readers? I have read and I have written, and I can tell you that writing takes a lot more effort. But it’s more than that. Just because people can take some sort of active role in a story doesn’t mean they don’t want a storyteller. As Seth Godin responded on PSFK, “People have had guitars forever, but we still go to rock concerts.”

I think a couple of factors are at work here. First, the rise of crowdsourcing in such unlikely fields as molecular biology has led people to wonder if they shouldn’t just crowdsource everything. And second, the eagerness of people to participate in stories they really care about—another characteristic of transmedia storytelling, one Henry dubbed “performance”—calls the whole idea of authorship into question. If the audience starts telling the story, what’s the author supposed to do? Is there even still room for an author? Confusion abounds.

By definition, alternate reality games involve telling stories in a highly participatory manner. World Without Oil was a ground-breaking online experience—a simulation of a global oil crisis which asked players to construct their own scenarios on a week-by-week basis. The storytellers set some basic ground rules and got out of the way. The ARGs Jordan helped create—like ilovebees, which was a marketing device for Halo 2, and Year Zero, which Trent Reznor commissioned to explain his 2007 concept album—are much more directed. As Jordan said on the panel, it’s as if they wrote a story, planted some evidence to suggest the story had happened, then tore up the story and let the players reconstruct it on their own.

But what about a show like Mad Men? Louisa Stein (who teaches film, television, and new media) and I have both been fixated lately on the Mad Men Twitterers—fans, most of them in the ad business, who tweet as one or another of the show’s characters. AMC was dissuaded from shutting down the accounts by Deep Focus, its digital agency, but Matthew Weiner, the show’s creator, has refused to grant them a semi-official role or even a public acknowledgment. Mad Men clearly engages its audience in a very deep way, but it makes no allowance for participation. So is Weiner a bad author? And should authors be banned to atone for his sins?

Well, he certainly is a control freak—but so is Steve Jobs, and it’s no coincidence that both of them have managed to create things that are borderline genius. That’s why I suggested we consider authorship on a continuum, with Mad Men on one end and World Without Oil very close to the other. I’m fine with crowdsourced narratives, but I don’t think they’re preferable to the other kind. They’re just different, in the same way that YouTube is different from TV.

The Wonderful Wizard of Oz