Investigative reporting meets fiction for ‘The Girl with the Dragon Tattoo’ 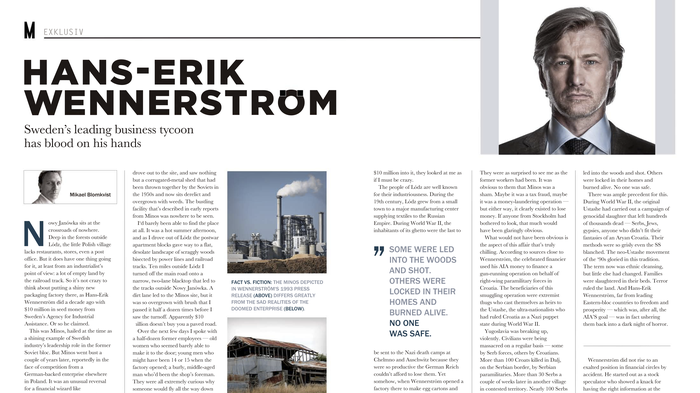 For David Fincher’s film adaptation of The Girl with the Dragon Tattoo, 42 Enter­tainment created Mouth Taped Shut, a par­ticipatory ex­perience that enveloped the dark mysteries of the Vanger clan in a further air of menace and foreboding. I was enlisted to imagine Millennium magazine, the fictional peri­od­ical headed by jour­nalist Mikael Blomkvist (Daniel Craig), as a real-life publi­ca­tion. The idea was to create an im­mersive experience by blurring the bounds between fiction and reality.

The magazine assignment came in two parts. For the first, the plan was to write the opening segment of Blomkvist’s exposé of bil­lionaire speculator Hans-Erik Wenner­ström, the article that landed Blomkvist with a libel conviction at the start of Stieg Larsson’s novel. Blomkvist had Wennerström dead to rights at first. Nu­merous sources confirmed that the shady financier had perpe­trated a scam in the early ’90s—taking money from an economic development fund set up by the Swedish government, using a little of it to start a sham man­ufacturing operation in Poland, and appropriating the rest to tide him over a financial rough patch. But then something strange happened. A “deep throat” turned up with reports that Wennerström had used the money to finance arms deals for ultra-right-wing Ustache forces in Croatia during the breakup of Yugoslavia. His stories could not be con­firmed, but they were too hot to ignore—and Blomkvist fell for the bait.

Larsson described both the reporting process and the media fallout from the libel conviction in a fair amount of detail, but he left the article itself to the reader’s imagination. So the task was to write the exposé as Blomkvist himself might have done. This involved a deep dive into Larsson, who’d based Millennium on his own crusading publication, Exposé; his alter ego, Blomkvist; business devel­opments in Sweden and Poland in the early ’90s; and not least, since this had to conform to Larsson’s placement of the Wennerström factory somewhere on the outskirts of Łódź, Polish geography.

Part two of the Millennium assign­ment was to write the better part of an entire issue—the issue that would have come out imme­diately after Blomkvist’s libel con­viction. The cover showed Daniel Craig with the line “Blomkvist i kedjor”—”Blom­kvist in chains.” But Blomkvist himself was nowhere in the issue, having just taken a leave of absence from the magazine to lick his wounds—and, as it happened, to get caught up in the mystery that links him with Lisbeth Salander and com­prises the bulk of the story. So in place of Blomkvist’s own work, there would be articles about him—a letter from the editor, Erika Berger; a profile by a film critic from the Svenska Morgon-Posten, the fictional Stockholm daily for which Berger goes to work in a later volume of Larsson’s Millennium trilogy; a list of Blomkvist’s career highlights; and a piece on the exposé by Monika Nilsson, Millennium‘s top inves­tigative reporter (after Blomkvist himself, of course).

Meanwhile, glimpses of the filmmakers at work were appearing on the Tumblr blog Mouth Taped Shut. One day in October, two months before the movie’s December 2011 release date, visitors discovered what appeared to be a vintage Super-8 film taken from inside a car as it passed an overturned fuel truck on a narrow bridge—precisely the kind of accident that had happened on Hedeby Island on the day in 1966 when 16-year-old Harriet Vanger disap­peared. Clues in the video led to the discovery of another site, What Is Hidden in Snow, which at first seemed to contain nothing but an empty grid. But the video contained yet more clues, which if followed correctly revealed an image and a set of numbers that suggested some hidden object waiting to be found.

Over the next two months, as one artifact after another was discovered in this way, the grid started to fill in. Framed, dried flowers turned up in Los Angeles, Las Vegas, Paris, Barcelona, and some three dozen other cities. Lisbeth Salander’s motorcycle helmet was found in San Francisco. People in Stockholm found a videocassette containing a vintage episode of Hard Copy, the long-defunct tabloid TV show, exploring the dis­ap­pearance of Harriet Vanger. On the morning of December 9, Blomkvist’s Wen­nerström exposé was discovered in St. Louis. A half-hour later, treasure hunters in El Paso, Texas located Millennium‘s special issue on Blomkvist. Before the end of the day, someone in Chicago found flower #40, and the grid was complete.