Peter Weyland of ‘Prometheus’ makes a surprise appearance at TED: ‘Allow me to introduce myself.’ 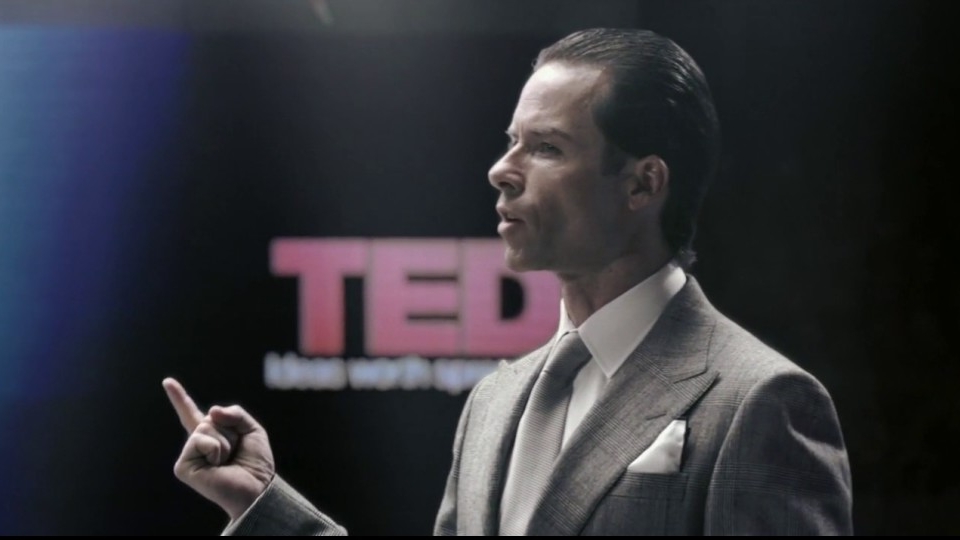 Yesterday saw the release of one of the most compelling TED talks ever: Peter Weyland’s in the year 2023. Of course, 2023 hasn’t really happened yet, and neither has Sir Peter. But both will arrive soon enough—in June, to be precise, with the release of Ridley Scott’s Prometheus. The TED talk—performed by Guy Pearce, who plays the seriously overreaching CEO of Weyland Corp. in the film—is one of those great in-fiction artifacts that make the boundary between entertainment and reality so fungible these days.

Pearce’s stentorian delivery makes him the perfect TED orator: He comes across as a sort of Richard Branson on steroids. As the camera sweeps the stage, he holds its gaze relentlessly:

At this moment in our civilization, we can create cybernetic individuals who in just a few short years will be completely indistinguishable from us. Which leads to an obvious conclusion: We are the gods now. For those of you who know me, you will be aware by now that my ambition is unlimited. . . . For those of you who do not know me, allow me to introduce myself. My name is Peter Weyland, and if you’ll indulge me, I’d like to change the world.

Directed by Luke Scott, Ridley’s son, and written by Damon Lindelof, who co-wrote the screenplay for the movie, the video is presented on the TED site in deadpan fashion, with an “about the speaker” write-up that details Weyland’s role in launching “the first privatized industrial mission to leave the planet Earth.” In a Q&A on the TED blog, Lindelof says, “I never thought in my wildest dreams we would get the actual TED branding.” But he got in touch with TED’s Tom Rielly, and pretty soon they were on.

Lindelof has been involved in this sort of thing before, of course. In May 2006, when he and Carlton Cuse were exec-producing Lost, ABC ran an ad for the fictitious Hanso Foundation. This turned out to be a rabbithole for The Lost Experience, the alternate reality game that played out that summer. Two years later, ABC ran a spot and even put up billboards for Oceanic Airlines, whose plane crash kicked the whole thing off.

But Lindelof is hardly the only one to use real-world media outlets to spread an in-fiction narrative. This past December, as part of its viral experience for The Girl with the Dragon Tattoo, 42 Entertainment produced a vintage episode of Hard Copy that contained disturbing allegations about the disappearance of Harriet Vanger. And back in July 2008, a few days before Mad Men began its second season on AMC, Advertising Age published a special issue from 1960 that featured actual ads from purported clients of Sterling Cooper as well as an amusing interview with creative director Don Draper:

How do you think this new medium, television, will change the way advertising talks to consumers–and how will it affect advertising in general?

Well, the first thing I’ve noticed, it seems to be more about show business, not just putting ads into television shows without irritating viewers. But the ads themselves have to tell stories, have music, have striking images, be entertaining–maybe even more entertaining than the shows. It’s going to be a tough one.

In its advertising column, the New York Times reported that Lionsgate, which produces the show, paid for the fake issue of Ad Age (actually a 16-page insert in a regular issue) at the suggestion of its media agency, Initiative. So far, the Times itself has not (knowingly) been sucked into anyone’s fictional narrative. I’m waiting.

My house track with this speech http://soundcloud.com/djsuen/djsuen-prometheus-weyland