Where the Mystical Meets the Bizarre

An accretion of Victoriana in Silicon Valley

EVERYONE SHOULD HAVE A FAVORITE California freeway. Mine is Interstate 280, the scenic route from San Francisco to San Jose, not so much because it's well engineered or beautiful, although it is, but because to drive it is to experience repeated warps in time.

First there are the rolling hills of the San Francisco Peninsula, their grassy slopes dotted with live oaks and grazing horses — a pastoral vision that's punctuated by a two-mile-long atom smasher that passes beneath the roadway and by a radio-telescope with a huge dish aimed heavenward in the search for alien civilizations. Then the land flattens out and the traffic pours headlong into the 40-mile swath of shopping centers, industrial parks, ranch houses and condos known as Silicon Valley. A hundred years ago this area was covered with orchards and vineyards; virtually all that remains today is a 160-room Victorian farmhouse that sticks out amid the suburban sprawl of Silicon Valley like some kind of pathologically overgrown Addams Family house plunked down in the midst of a Steven Spielberg movie. 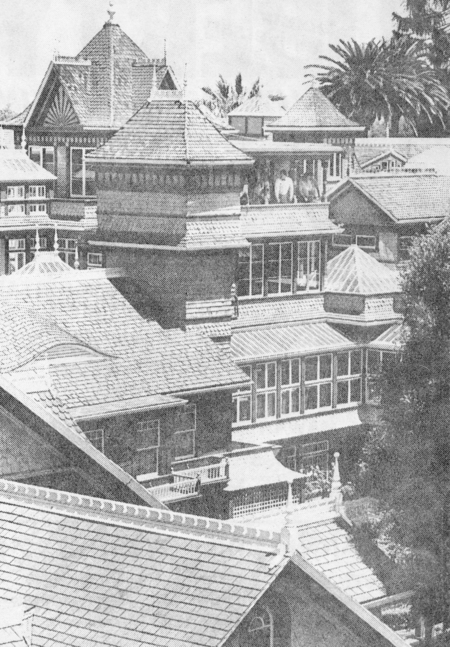 The Winchester mystery house, on Win­chester Boule­vard in San Jose, is one of those tour­ist at­trac­tions with the appeal of the mys­tical and the bizarre. It was built about the same time as the mar­velously ordered quad­ran­gles of Stanford Uni­versity, the aca­demic enclave in Palo Alto whose 8,200 acres sur­round the accelerator and the observatory. But un­like the Stan­ford quads, which make sense, the Win­ches­ter house has doors that open onto blank walls, sky­lights that never see the sky, and stair­cases that go down only to go up again. In an age in which Vic­toriana is regarded as charm­ing rather than claustro­phobic, it remains the ultimate Vic­torian night­mare, an accre­tion of ga­bles, tur­rets, towers and porch­es as­sembled with­out design or ap­parent pur­pose. I went there to dis­cover what quirk of fate had put this monument to mad­ness in what has become the logic capital of the world.

The story is that when Sarah Win­chester came to California from Connecticut in 1884, hav­ing lost her husband and in­fant daughter to disease, she was con­vinced that she would share their fate unless she built con­tinu­ously. As the heir to the Winchester rifle fortune, she had the where­withal to keep workmen hammering away every hour of the day, every day of the year, for 38 years. She got her instructions by communing with the spirits of those who'd been killed by the source of that fortune, the Win­chester repeating rifle — a bit of high-tech weaponry known as ''the gun that won the West.'' Dead Indians were the price of progress, but she didn't want them coming back to haunt her. Yet as long as she kept building, the spirits assured her, no harm would come to her.

She did as directed, and when she died, an arthritic recluse of 82, her estate was sold for next to nothing. Nowadays a commodious parking lot funnels visitors into the inevitable ''gift shoppe'' and adjacent Sarah Winchester Cafe, which dispenses such concoctions as ''Sarah's Spook Juice'' (a whipped orange drink with whipped cream topping). The spook juice seemed to be of dubious authenticity, but I did succumb to a lavishly illustrated guidebook that made a big deal about Mrs. Winchester's fixation on the number 13 and asked, ''Did Sarah build doors that open onto solid walls to confuse evil spirits or because, as her own architect, she had a lot to learn?'' It seemed like a good question, although the photographs made her plans seem anything but inept; viewed from above, the house looked like the closest thing to an M. C. Escher design ever constructed.

The tour was led by an elderly woman who began by warning us not to stray from the group lest we get hopelessly lost in the maze of twisting passageways, winding stairways and false doors. She showed us a variety of sights: the ''goofy staircase,'' which has 7 switchbacks and 44 steps but only goes up 9 feet; the ''7-11 staircase,'' which goes down 7 steps and up 11; the ''13th bathroom,'' with its 13 windows; the ''seance room,'' where Sarah Winchester allegedly got her building instructions and which we exited through a cupboard door. There was the bedroom she was trapped in during the 1906 earthquake, a storeroom full of unused Tiffany windows and doors and a whole series of rooms left unfinished after her death in 1922. The house was an endless rabbit warren of eccentric little rooms, and while there were reasonable explanations for some features — the switchback stair­case, for example, requires 44 steps to go up 9 feet because the steps are two-and-a-half-inch ''easy risers'' intended to make climbing easier for disabled people — the totality of it defied belief. The tour guide, who was wearing a floor-length skirt, went through her well-rehearsed patter with the air of one whose daily traversal of the spirit world never ceased to fuel her amazement. She told us about the will, which had 13 parts and was signed 13 times, and she pointed out quite ominously that at 24,000 square feet, the Winchester mystery house was 13 times the size of the average Amer­ican home. Finally we were set free to wander about the garden. The only way out was through the gift shoppe, which seemed hardly less bizarre than the house itself. I saw souvenir wine glasses, shot glasses, baby spoons, key chains and T-shirts and 13 (more or less) different kinds of sun visors.

When I left the house I got stuck on the freeway, Interstate 280, which takes on aspects of a parking lot every weekday afternoon about 3:30. I didn't have anything else to do so I started thinking about progress, which may be the only Victorian notion that has never really gone out of fashion. Sarah Winchester was one of its disciples: Not only was her fortune based on Yankee ingenuity, but her house also had one of the first automatic elevators on the West Coast and she herself held the patent on its rather innovative laundry sink. She was also one of its victims, if we accept the notion that she went on her building spree because she was afraid of the spirits of those killed by the Winchester rifle. But the real apostle of progress in the Santa Clara Valley in her era was Leland Stanford, the Sacramento grocer turned railroad baron who transformed his Palo Alto horse farm into Stanford University.

Like Winchester, Stanford was motivated by grief: he and his wife founded the university as a memorial to their son, who died in his teens. But they seem to have suffered no lingering guilt over the source of their fortune — though devoutly religious, they managed to avoid any undue concern about the souls of the coolies who died building the transcontinental railroad — and their thoughts were expansive rather than morbidly introverted. So while they created the university whose engineering strength gave rise to Silicon Valley, all she left was a lure for curiosity seekers.

To wander through Stanford's quadrangles and the Winchester mansion is to experience a physical manifestation of the rational versus the pathological mind — the one ordered and linear in its progressions, the other a random accretion of detail. If Stanford is the embodiment of progress, the Winchester house is progress gone amuck. But at some point — I think as I was inching past the on-ramp from Stevens Creek Boulevard, the Champs-Elysees of Silicon Valley, a six-lane highway lined with auto dealerships — it occurred to me that, without anyone's realizing it, Sarah Winchester had set the pattern for the development that Stanford made possible.

In Silicon Valley and across the country, whole communities now feel they have to keep building because if they ever stop they'll die. Growth-for-its-own-sake is an often-stated corollary of progress, and yet it produces freeways that go nowhere, toxic waste dumps next to wells, houses and stores and factories and offices all jumbled together without plan or reason. If you pulled away from the Winchester house in those aerial photographs you'd find many square miles of equally random construction that few people even bother to take note of. Yet on the evidence of what I'd just seen, mindless construction yields not eternal life but puzzlement among those who follow. Of course, this wasn't mentioned on the tour. ■

Frank Rose, a contributing editor at Esquire, is working on a book about recent developments at Apple com­puter company.