Behind the immersiveness trend: Why now? 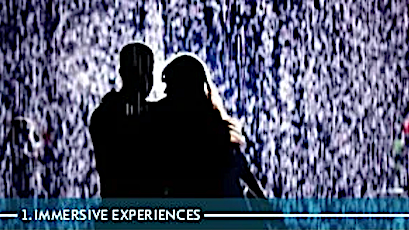 When JWT Intelligence announced its “10 Trends for 2014 and Beyond” recently, trend #1 was “immersive experiences.” Certainly you can feel this in New York: From Punchdrunk’s Sleep No More (now running for nearly three years) to MoMA’s Rain Room to Yayoi Kusama’s Infinity Mirrored Room, people are willing to pay top dollar or line up for hours to experience something all-encompassing and beyond the ordinary. But why?
The new report—based on a survey of Internet users in the US and the UK, on as­sessments from JWT planners around the world, and on in­terviews with outside observers (myself includ­ed)—lists six key reasons. Interestingly, only two have anything to do with advances in technology or production techniques. The re­maining four stem from broad societal shifts—shifts that are tied to, but in many cases a re­action against, the always-on nature of the digital world.

We’re talking virtual reality here: The much-anticipated (and brilliantly named) Oculus Rift headset, currently in development, looks to de­liver on the promise VR first showed in the 1980s. The difference is that now it actually works outside the lab. With a 110-degree field of view and some pretty mind-boggling demo games, the Oculus Rift looks set to redefine immersion. No wonder Andreessen Horowitz just led a $75 million round of funding, with Marc Andreessen joining Ocu­lus VR’s board.

2. The rise of deep media

Just a few years ago, the idea of telling stories through different types of media was mostly just that—an idea. Lost had attempted it, none too successfully; 42 Entertainment did a lot better teaming with Trent Reznor on Year Zero. The turning point may have been 42’s subsequent work on The Dark Knight, an epic, 15-month journey that brought some 11 million people worldwide into Christopher Nolan’s saga. Hardly a major movie or television series launches today without some attempt to engage the audience directly—to invite them into a world, not just let them view it from afar. There’s still a great deal of work to be done—many of those “second screen” expe­riences are all too forgettable—but at least network and studio executives have it on their agenda. Which is a big change from the way things used to be.

Now for the long-term societal trends:

When JWT asked people if they preferred ex­periences or things, experiences won hands down. This is a powerful, deep-rooted shift: I came across similar findings a decade ago when I was writing for Wired about 18-to-34 males watching less TV. But not just any experience will do, the JWT report notes: “As experi­ences supersede things, they need to have more im­pact.” Make them impactful enough and you get people standing in line for hours in the hot sun outside MoMA so they can get a few minutes in the rain. (Ac­tually, in an artificial rainstorm that, thanks to a field of elec­tronic sensors, miraculously parts for those standing inside it. You had to be there.)

4. Experiences that are shareable

But we want more than just experiences; we want experiences we can share. Facebook, Twit­ter, Instagram, Pinterest: We are social an­imals made all the more social by ­electronic media, and if we can’t share what we’re doing, we might almost as well not be doing it. Stand­ing in the rain? Totally made for Insta­gram.

5. Deliver us from distraction

And yet there’s a downside to all this as well: In a multitasking world, distractions abound and e-burnout looms. Which in turn fuels a craving for experiences so all-consuming they block out everything else—physical experi­ences in partic­ular, though a virtual reality headset will cer­tainly do the trick as well.

Underlying all this, as the charts to the left dem­onstrate, is a major generational shift: The young­er you are, the more likely to feel dis­tracted, to want an out from the always-on world, to respond to entertainment and adver­tising that goes beyond the ordinary, and to crave sensory experience. More than Gen X-ers and far more than their Boomer parents, Mil­lennials want—and expect—to be active par­ticipants, not pas­sive consumers. It’s not hard to figure out why. From video games to social me­dia, they’ve been trained to be in­volved. Boom­ers, on the other hand, are the group for whom the term “couch potato” was invented back in the ’80s.

In addition to providing much more detail on the desire for immersion (including further manifestations and an assessment of what it means for brands), the full report lays out a number of related trends, from “the age of impatience” to “proudly imperfect”—which is illustrated by what has to be the world’s ugliest tomato. Nice.

Nice call with the Oculus Rift as your first list item. I agree completely, but I wonder how fast a device like the Oculus would tip? I don't predict it will be seen as essential like a mobile phone (or possibly tablet). How fast do you see adoption for hmd, and what other sensors will come with it?

Thanks, Daniel. That's a good question. I certainly don't think it's going to achieve smartphone-like penetration. But I think the people who want a head-mounted display like the Oculus Rift are going to really, really want it, even if they're not a huge subset of the population. I suspect it will resemble the participation levels of deeply immersive entertainment experiences like Why So Serious? for The Dark Knight—they take on a funnel shape, with large numbers of people following the action online, smaller numbers of people solving puzzles and contributing to the online discussion, and even smaller numbers of people venturing out into the real world to retrieve cakes that turn out to have phones in them. The deeper the engagement, the fewer the participants, and the greater the reward. I could be wrong, but that seems to be the pattern.