The imaginarium of Guillermo del Toro 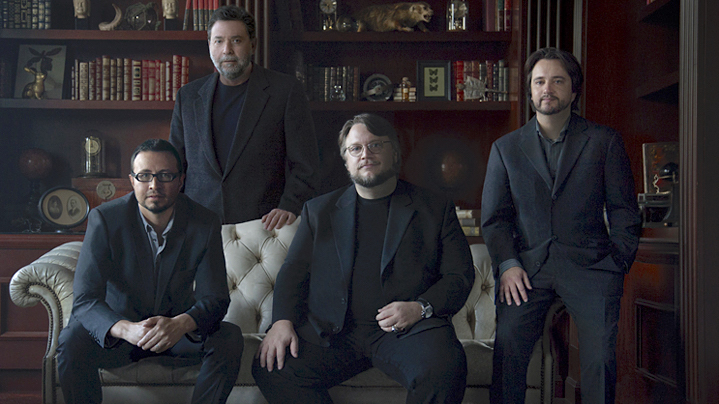 It’s always a little hard trying to keep up with Guillermo del Toro, but the past couple of weeks have been tougher than usual. First he opened a studio to produce stories that, as one of his part­ners put it, “fuse together” the dis­ciplines of movie, video game, and Web pro­duction. Then he announced a partner­ship with THQ, the game publish­er, to create a trilogy of horror games called inSANE. All this while prepping The Haunted Mansion for Disney and All the Mountains of Madness for Universal and Trollhunters for DreamWorks Animation, finishing part three of his Strain trilogy with Chuck Hogan, and having to explain why he pulled out of directing The Hobbit in May after two years of work and endless production delays.

Of all these projects, it’s Mirada, the Los Angeles-based “idea factory” that opened its doors December 9, that’s the most tantalizing. An accomplished filmmaker who has made no secret of his love for video games, del Toro now seeks to transcend the limitations of movie studios and game studios alike. Mirada is a four-way partnership with his longtime cinematographer Guillermo Navarro and with Mathew Cullen and Javier Jimenez of the innovative LA ad shop Motion Theory. “We are creating a storytelling engine [note the game reference] in the form of a company — an imaginarium, where we are free to explore the practical possibilities of transmedia without compartmentalizing our artistic process,” del Toro said in a statement. “Mirada will be an adaptive entity, constantly in transformation. We see a different model that looks beyond what the market is doing right now to where it will be in ten years.”

Del Toro has long had such ambitions in mind. In a 2009 interview in Wired he said, “In the next ten years, we’re going to see all the forms of entertainment—film, television, video, games, and print—melding into a single-platform ‘story engine.’ The Model T of this new platform is the PS3. The moment you connect creative output with a public story engine, a narrative can continue over a period of months or years. It’s going to rewrite the rules of fiction.”

I got my first inkling of what this sort of storytelling might mean in 2006 when I interviewed del Toro at Cannes, where Pan’s Labyrinth received its premiere. It was your standard film-festival encounter, 30 minutes at best out of a grueling day the filmmaker spent fielding questions from international media types. But as we sat in the courtyard of his hotel, del Toro showed me his leather-bound notebook, every page of it crammed to bursting with scribblings and sketches. It seemed raw and unprocessed, a leap of the imagination captured in mid-flight between synaptic spark and finished film. I was transfixed.

I was equally transfixed by the movie itself. Filmed in Spanish for a reported $19 million, Pan’s Labyrinth is the story of a young innocent caught in the brutal aftermath of the Spanish Civil War. But what it’s really about is the transporting power of imagination. At its core is a little girl’s need to deal with the horrifying reality around her by creating an alternate reality, a fantasy world—half dream, half nightmare—that would enable her to process the unfathomable.

There’s nothing new about movie directors’ sketchbooks. What was new was seeing one—and what was striking about seeing del Toro’s was the hint it offered of a story beyond the story, a hint that was partially borne out in the movie’s Web site, which augmented the film by reproducing pages from the notebook and inviting people to submit their own sketches as well. Pan’s Labyrinth grossed a fraction of the box office total that big-budget del Toro flicks like Hellboy pulled in. (“I felt that if I did a third film in a row within the studio system, I would die,” del Toro told me at Cannes. “So I said, ‘Screw it.’ I wanted the freedom and the madness of doing a movie that is not safe by any means.”) But just as he invited me into his world during a superficial interview situation, del Toro invited his audience in as well. He liked the result so much he named eleven winners instead of the five they’d planned for.

[Update: Though the site is no longer up, the sketches have since been made available in a book.]

Deep media storytelling has come a long way since then. It’s captured the imagination of everyone from Christopher Nolan, who recently announced plans for an Inception video game (“I always imagined Inception to be a world where a lot of other stories could take place,” he told EW‘s Inside Movies blog), to Anthony Zuiker of CSI. Through the involvement of 42 Entertainment, it’s enabled millions of people to engage directly with such stories as Year Zero, The Dark Knight, and TRON: Legacy. And with TRON: Legacy producer (and LivePlanet cofounder) Sean Bailey now in charge of production at Disney, it’s even gained a foothold in the Hollywood studios. Truly getting there requires a warp drive Hollywood has yet to invent—but Mirada seems the most concerted effort yet to make the jump.

More explanation required - for us mere mortals it's too woolly to properly comprehend.

Um, sorry. The basic idea behind projects like Mirada—not that there are many projects like it—is to find a new way of telling stories that isn't limited to any one medium (movies, games, TV, for example). Because the Internet can mimic any medium—text, video, game—it's encouraging people to explore the idea that they can somehow be used together to tell a single story. This is what Henry Jenkins of USC, in his book Convergence Culture, calls transmedia. It's also the subject of my book, The Art of Immersion, which will be out next month. My take is that people seem to need 20-30 years to figure out how to properly tell stories with any new medium (film, radio, TV) and the Internet is no exception. For more info, please take a look at the Art of Immersion Web site. Thanks for writing. Woolly sucks.